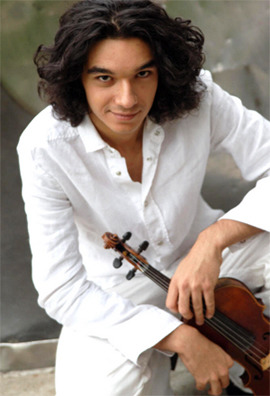 At the young age of 24, Nemanja Radulovic has already set aflame concert halls at each of his appearances, thanks to his amazing performances and charismatic stage presence.

Born in Serbia in 1985, Nemanja began his musical studies at the age of seven. In 1996, he won the Prize of October for music of the City of Belgrade, then the Special Prize of the ministry of Education of the Serbian Republic “Talent of the year 1997”.

Nemanja had also taken part in master classes given by Yehudi Menuhin, Salvatore Accardo, and Joshua Epstein, with whom he studied in 1998 at the Saarlandes Hochschule für Musik und Theater in Saarbrücken, and Dejan Mihailovic, whose class he joined in 1999 at the Faculty of Arts and Music in Belgrade. At the age of fourteen, Nemanja moved to France and perfected with Patrice Fontanarosa at the CNSMD of Paris.

In 2005, Nemanja was awarded International Revelation of the Year at the Victoires de la Musique classique in Cannes (European Association of Artist Managers, MIDEM prize , MIDEM prize), and was nominated Rising Star in 2006.

Nemanja has been recording for the label Transart Live, with a solo CD (Bach, Miletic, Paganini, Ysaÿe) which is acclaimed by the press and awarded a Diapason discovery. His latest album “The Devil’s Trills”, released in September 2009 for the label Decca/Universal, has also received many international awards, including “Choc” of Classica, “Clé” of Res Musica, and “Recommended” by the Strad.