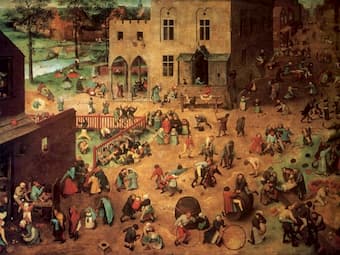 Pieter Bruegel’s enormous painting Children’s Games is 118 x 161cm (46” x 63”) and throws us into the middle of a complicated street scene. Over 200 children play over 80 different games and we approach it with our modern eyes trying to put labels on what we see.

A visual encyclopedia of children’s activities in the mid-sixteenth century, the painting encourages us to jump from activity to activity. The work was unprecedented, with the only similar work the little marginal paintings found in manuscripts of the day. But those don’t have the life and activity seen here. Scholars look at the painting for symbols, of course. Are we to read those hoops rolling in the front center as emblematic of the circle of life of Dame Fortune (as in Orff’s Carmina Burana: O Fortuna)? 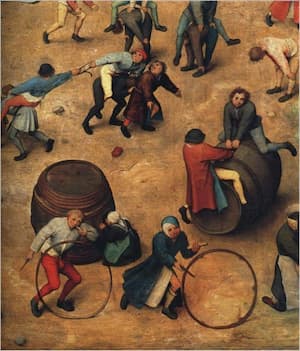 Little girls play with knucklebones in the front left corner while behind them a boy blows a bubble – is this a symbol of the transience of life, as seen in contemporary Vanitas paintings? Or, is it just boy blowing a bubble?

This evocative painting was used by English composer Peter Maxwell Davies as the inspiration for his fourth Naxos Quartet. His work, Children’s Games, takes the active play of the painting, “leap-frog, bind the devil with a cord, truss, wrestling – alongside quieter pastimes – masks, guess whom I shall choose, courting, odds and evens,” to create a single-movement work that is as jumpy as the picture. Just as your eye jumps from player to player in the picture, so Davies makes your ear travel a convoluted but directed path. Sometimes you’re led down strange passageways and other times you end up in a closed room. As life as in games?


Part of the series of ten commissioned quartets, the fourth quartet was preceded by a work of a very different nature. The third quartet was intended as an exploration of a magic 3 x 3 square. Actually, it was going to explore ‘…the compositional potentialities of a magic square of Saturn (3 x 3) within one of Mars (5 x 5) within one of Venus (7 x 7). This would all be developed alongside an independent square of the Moon (9 x 9), with the associated isometric disciplines, based upon the plainsong proper to the celebration of St Cecilia on 22nd November, ‘Audi filia et vide’.’ But then the invasion of Iraq happened, and his plans switched immediately, and the third quartet became a ‘manifestation of his feelings of outrage’ at the invasion. 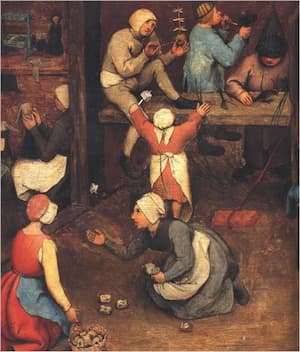 When he started the fourth quartet, Davies wanted to write something lighter and less fierce, hence Children’s Games. However, as we know, children’s games aren’t the innocent light fantasy as we often think of them. They can be seen as the larger metaphor for adult games of aggression and violence. Given the subject matter of the third quartet, the fourth quartet has those elements hidden in its child’s play. In the picture, children hit their hobby horses with sticks, fight and fall, and jump on each other’s shoulders. They play upturned pots with knifes, kick each other, ride a fence like a horse, and, just as innocently spin tops, do head-stands, and play in the dirt. The only commonality is all the activity. At the end of the quartet, peace breaks out, the activity ceases, but for how long?