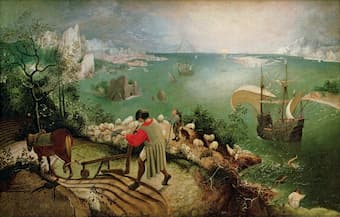 Landscape with the Fall of Icarus
(c. 1560) (Royal Museums of Fine Arts of Belgium, Brussels)

Flailing and falling, so Icarus descends from the skies, having melted his wings in the heat of the sun. In this landscape, we see life going on and then, in the bottom right corner of the work, the legs of the unfortunate flier as he makes his fatal descent.

Long thought to be the work of Pieter Bruegel the Elder, the work is now considered to be a copy of a now-lost original by Bruegel. The large painting, 73.5 by 112 centimetres (28.9 in × 44.1 in), follows the original story as recorded by Ovid, where Icarus is behind Daedalus. Below, a ploughman, a shepherd, and a fisherman regard the flying figures in astonishment, wondering if they’re seeing gods descend from the heavens. In the painting, the farmer is focused on his plough. The shepherd looks up but in the wrong direction and it is only the fisherman who witnesses Icarus’ fall. 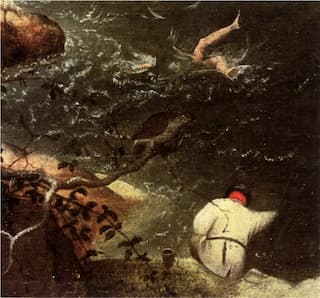 Detail from Landscape with the Fall of Icarus

There is another painting by Bruegel (or a follower) that also exists. Although the boards that the painting was done on post-date Bruegel’s death, the paintings must be considered as related to that now-lost original. In the second painting, now held by the Van Buuren Museum, Icarus’ father Daedalus hangs in the air and he’s watched by the shepherd, which would explain his attention to the air above him and not to the splash behind him.

W.H. Auden, in his 1938 poem Musée des Beaux Art, reflects on the men in the landscape and the ship sailing by:

In Bruegel’s Icarus, for instance: how everything turns away
Quite leisurely from the disaster; the ploughman may
Have heard the splash, the forsaken cry,
But for him it was not an important failure…

…and the expensive delicate ship that must have seen
Something amazing, a boy falling out of the sky,
Had somewhere to get to and sailed calmly on. 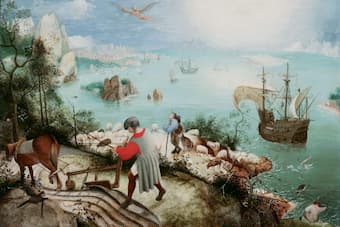 The Fall of Icarus (David and Alice Van Buuren Museum)

The image and Auden’s commentary on it was used as the inspiration for Brian Ferneyhough’s 1988 work for clarinet and chamber ensemble, La Chute d’Icare. He sets the musical scene as Bruegel pictured it: the boy has fallen and the world continues on.

The clarinet is the boy, flailing, having fallen from the skies because of his hubris and lack of care. Through the work, the circles in the water widen and then still. The clarinet has the last feeble word as he sinks.