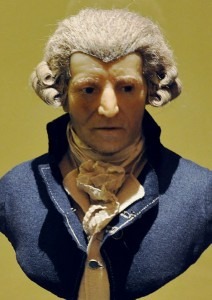 Joseph Haydn was highly successful in his musical profession and the business aspects surrounding it. Yet, his personal life was somewhat of a mess. Under contract with Count Morzin, Haydn fell in love with Therese Keller. However, once he secured the Kapellmeister position he unexpectedly married her sister, Maria Anna Theresia Keller! Maria apparently had little refinement, education or interest in Haydn’s musical activities, and the marriage was entirely unhappy from the get go. The marriage produced no children, and since the laws of the time did not permit divorce, the couple spent countless drab and miserable years together. Unsurprisingly, both took lovers with Haydn conducting a long-term love affair with the singer Luigia Polzelli. Even more devastating than his love-less marriage was Haydn’s 30-year tenure in the remote palace of Esterháza in Hungary. Lonely and cut off from the rest of European society, Haydn sought to visit Vienna as frequently as his duties would allow.

Let us not forget, however, that Haydn was the most celebrated composer of his time, and on 10 June 1789 he received an unexpected letter from Maria Anna Sabina von Genzinger. Nicknamed Marianne, she was married to the physician to Prince Nikolaus Esterhazy, and bore her husband six children. Marianne was a highly talented amateur musician who had continued her studies into adulthood. She had arranged the “Andante” movement of one of Haydn’s symphonies for piano, and sent a copy of her work to the composer asking for critique. “Most respected Herr von Hayden,” she writes, “with your kind permission, I take the liberty of sending you a pianoforte arrangement of the beautiful Andante from your so admirable composition. I made this arrangement from the score quite by myself, without the least help from my teacher; please be good enough to correct any mistakes you may find in it.” Haydn eagerly responded a couple of days later, “Nobly born and gracious Lady! In all my previous correspondence, nothing delighted me more than the surprise of seeing such a lovely handwriting, and reading so many kind expressions; but even more I admired the enclosure the excellent arrangement of the Adagio, which is correct enough to be engraved by any publisher.” Having made the initial connection, a social invitation to the Genzinger home soon followed.

Every Sunday, the musical elite of Vienna assembled at the Genzinger home and performed music of the finest quality. For Haydn, this was the fulfillment of his wildest dreams. “A comfortable, pleasant home; a woman of high culture who took the keenest interest in every one of his new compositions and who at the same time was so thoughtful a hostess that she prepared his favorite dishes; musically gifted children whom he could guide. The Genzinger home offered him all that he had missed throughout his married life.” A keen and intimate exchange of letters soon ensued, with Haydn writing on 9 February 1790 from Esterháza “Well, here I sit in my wilderness; forsaken, like some poor orphan, almost without human society, melancholy, dwelling on the memory of past glorious days. Yes, past, alas! And who can tell when those happy hours may return–those charming meeting where the whole circle has but one heart and one soul–all those delightful musical evenings that can only be remembered and not described? I beg Your Grace not to shy away from comforting me by your pleasant letters, for they cheer me up in my isolation, and are highly necessary for my heart, which is often very deeply hurt.”

By December 1790, Haydn embarked on the first of his two London journeys, and much of the information we have about his time in London comes from letters he wrote to Marianne. Biographers have attempted to address the question as to whether Haydn and Marianne actually engaged in a romantic relationship. There can be no doubt that Haydn was in love with her, but he probably understood the catastrophic consequences of pursuing her romantically. In addition, the “veiled references in his letters are not matched in Marianne’s correspondence, showing hardly more than friendship.” Haydn composed one of his finest piano sonatas, Hob. XVI/49 for Marianne. Concerning the second movement he writes, “the Adagio is quite new…it contains many things I shall analyze for Your Grace when the time comes; it is rather difficult but full of feeling.” A mere two years later, Marianne suddenly died of unknown causes at age 38. The Haydn biographer Karl Geiringer writes, “With Marianne’s death, something never to be recaptured went out of Haydn’s life, and a sarcasm and asperity in his nature began to show.” It has been suggested that Hadyn’s somber F-minor variations for piano, Hob. XVII:6 were composed in direct response to the death of his muse.