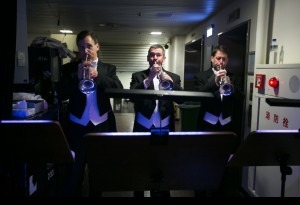 Orchestral musicians groom themselves to be heard and seen but sometimes composers ask musicians to perform from offstage. These composers want the effect of distance or an antiphonal effect in the music. Occasionally the backstage music might come from a lonely trumpet, sometimes an entire group, which then needs its own conductor. In either case, one wonders, how does the entire ensemble stay together?

In the past, doors leading to the stage had to be opened. Musicians played a risky game of peek-a-boo to see the maestro and not be seen by the audience. With today’s technological advances it is much easier. A small television camera is embedded on the back wall of the stage or from one of the side balconies so that the offstage players can observe the maestro’s beat. Still, the distance has to be factored in, as even a slight delay in the sound will cause the ensemble to fall apart. Moreover if the offstage player relies on his or her ear, because of the distance, the notes often sound flat and might cause the player to lower their pitch. 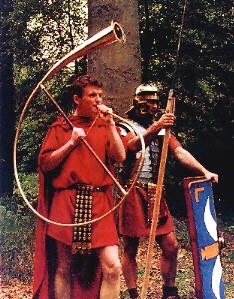 Ludwig van Beethoven composed his Leonore Overture No. 2 in 1805 as an overture to his only opera, Fidelio, which caused such anguish that Beethoven took ten years to write the work. He revised it twice and wrote four different overtures. This one is performed most often in the concert hall. The overture utilizes an offstage trumpet to announce the arrival of the king’s representative who will punish the imprisoned protagonist. The principal trumpet must sneak off the stage to a predetermined spot in the wings backstage. The second call is louder than the first. The player might move closer to the stage or the door to the entrance of the stage is opened for more volume.

Beethoven : Leonore Overture No. 2, Op. 72a offstage trumpet at 11:10 and second time at 11:30
Other composers have written for one offstage instrument. Berlioz begins the third movement of Symphonie Fantastique with a lyrical melody in the English horn. In the distance, evocative replies are heard from the oboe. Prokofiev uses an offstage cornet in his Lieutenant Kijé Suite and in the Carnival of the Animals by Saint-Saëns, orchestras sometimes place the “cuckooing” clarinet in the balcony out of sight. During children’s concerts we crane our necks. Where is that mischievous instrument?

Brass musicians love Ottorino Respighi’s glorious Pines of Rome with its massive forces. Typically the conductor chooses to put the numerous offstage players all over the hall. The musicians sometimes have to sprint up the staircases to the balconies, or race backstage or even dash to the lobby. Tough to play when you are out of breath. Maestros love to turn around to conduct these players and face the audience! 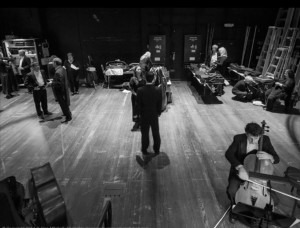 In addition to woodwinds, brass, organ, extra percussion, and a recording of birdsong, Respighi asks for an instrument called the buccina, the predecessor of the trumpet and trombone—used in ancient Rome to announce night watches and to summon soldiers. Today these parts are played on modern horns, trumpets or flugelhorns. I recall a performance when the extra brasses were put in the balcony boxes on either side of the hall. Of course they were miles away from each other and those of us on stage. Orchestra Hall is quite reverberant. Predictably, there was a delay—a second or two—in the “offstage” playing. The conductor had a fit. He had the musicians play it over and over during the rehearsal screaming, “Anticipate!! You’re late!!” but he couldn’t be heard above the din.

Pines of Rome– Off stage players can be seen in balconies and back of hall– beautiful offstage solo trumpet is at 4:40, and offstage brass at 17:30 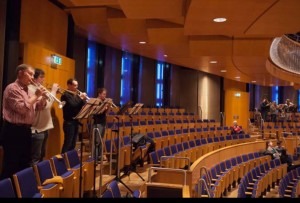 Mahler’s first encounters with music were the street and folk songs, military bands and church bells he heard in his village. Cowbells and suspended bells reminded Mahler of his boyhood in a small town in Bohemia, (now part of the Czech Republic.) He liberally used offstage musicians in his symphonies (except numbers 4 and 5) especially cowbells and chimes but also trumpets, some percussion and trombones. The largest forces are in Symphony No. 2 with 4 trumpets, 4–6 horns, bass drum with cymbals attached, triangle and timpani, and Symphony No. 8 with 4 trumpets and 3 trombones. In these cases the assistant conductor is utilized. He or she coordinates the backstage players and tries to keep up with the onstage music.

Once one of our horn players had a babysitter cancel at the last minute. She hurried to the performance of Mahler Symphony No. 2 and sat her son in the press box, in the first balcony right above the stage. It happens to be where the small camera is installed, focused on the conductor onstage. Much to the horn player’s consternation, she noticed her son playing with the camera. She nearly dropped her horn! Fortunately, an observant stagehand noticed and jogged up to the balcony to adjust the camera—just in time for the entrance of the offstage brass.

One of my favorites to play was Richard Strauss’ Alpine Symphony. His largest orchestral work, Strauss specifies 125 players including wind and thunder machines. If he had his way he would have doubled the harp and woodwind parts. Strauss writes for 12 horns, 2 trumpets and 2 trombones offstage. Where to put them? Well let me say that one can hardly move backstage with all the chairs, stands, and other paraphernalia. But the effect is extraordinary.