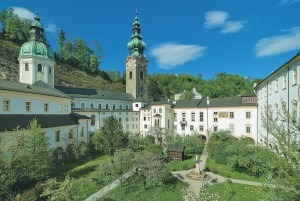 For countless visitors to the city of Salzburg, the Cathedral is one of the city’s major tourist attractions. The Frankish missionary Rupert founded the church in 774, and Wolfgang Amadeus Mozart received his baptism there on 28 January 1756. However, the Cathedral is not Salzburg’s oldest church. That honor belongs to the Abbey of St. Peter! It dates back to 698, and remains the oldest continuously active monastery in the German-speaking world. Spreading the Christian message to the northern edge of the Alps, St. Rupert built the original church and monastery on the ruins of the Roman city “Juvavum.” He renamed the town “Salzburg,” and established the office of bishop and that of abbot, positions he simultaneously held until his death around 710. When a major fire destroyed the original buildings in May 1127, Abbot Balderich rebuilt the basilica in grand Romanesque style. Although the buildings were subject to numerous adaptations over the centuries, the church interior retains its original 3-nave Romanesque design to this day. 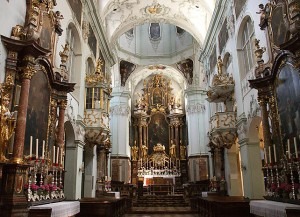 During the Middle Ages, St. Peter’s became famous for its exceptional writing school. In fact, it still houses the oldest library in Austria, holding amongst its 100,000 volumes, a manuscript authored by Bishop Virgil in 784! And when the Benedictine University of Salzburg was founded in 1622, the monks of St. Peter served as the initial faculty. From its very beginnings, the University hosted annual theatrical plays that developed into an opera-like art form. And in 1767, the 11-year old Mozart was called upon to compose music for the pedagogical play The Obligation of the First Commandment. This was quickly followed by Mozart’s first complete dramatic work, Apollo et Hyacintus. Mozart’s setting unfolds in three acts and features elaborate arias and extensive recitatives. It also features the first vocal trio composed by the young Mozart, and students and faculty first performed this miniature opera on 13 May 1767, at the Great Hall of Salzburg University. 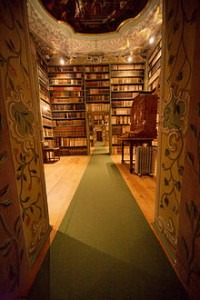 During Mozart’s early years in Salzburg, Abbot Dominikus Hagenauer administrated St. Peter’s church and monastery. Hagenauer celebrated his first mass at St. Peter’s on 15 October 1769, and Mozart composed the Dominikus Mass, KV 66 for this festive occasion. Hagenauer wrote in his diary, “Music for the Mass composed by Wolfgang Mozart, 14 years of age, which in every one’s opinion was most elegant. The Mass lasted over two hours, which was necessitated by the great number of worshippers. Wolfgang Mozart played on the great organ for half an hour to the astonishment of all.” When Hagenauer became Abbot on 27 March 1786, Michael Haydn furnished his Missa S. Dominici. As we all know, Mozart hated Salzburg and soon ventured out to conquer the musical world. However, he would specifically return to St. Peter on 26 October 1783 to conduct a performance of his monumental Mass in C minor. We really don’t know why Mozart composed the work in the first place, as it was clearly not commissioned. He suggested that he wrote it for purely personal reasons, possibly related to Constanze’s illness shortly before they were married in August 1782. Mozart rather cryptically writes to his father, “Time and circumstances have delayed our trip, as you yourself know, but as proof that I really made that promise I have the score of half a mass lying here in hopes of getting it finished.” The couple eventually did arrive in Salzburg at the end of July, and Mozart did bring “half a Mass.” Nannerl recorded in her diary, “To Mass in St. Peter’s, where my brother’s Mass was performed. All the court musicians were there.” It was the only performance of the mass during Mozart’s lifetime. 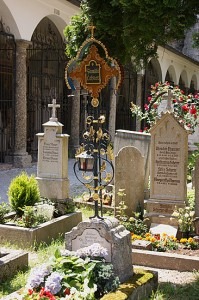 Wolfgang Amadeus Mozart: Mass No. 18 in C minor, K. 427
Just outside the walls of the monastery, and sheltered by the central castle mountain, lies the graveyard of St. Peter. It is the oldest Christian cemetery in town, dating back to 1627. Many of Salzburg’s high society are buried here, including Mozart’s sister Nannerl, and the body of Michael Haydn. The cemetery continues to be a tourist magnet as it also sheltered the Van Trapp family in the famed musical “The Sound of Music.”