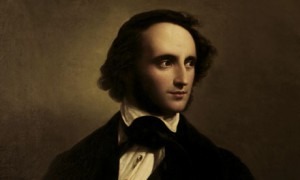 
It has become customary to celebrate the arrival of the New Year with the biggest fireworks money can buy. And there are always plenty of sumptuous nourishment, plenty of champagne and plenty of severe cases of the “cocktail flu” the very next morning! Seemingly, for a short period of time humanity decides to deliberately forget about its worries and troubles. And not surprisingly, music plays an important role in many of these New Year’s celebrations. Special concerts around the globe feature musical celebrations that reflect the vitality, sophistication and pleasure-seeking spirit of this festive occasion. For Felix Mendelssohn, on the other hand, New Year’s was a deeply spiritual time for reflection and for giving thanks. Baptized into the Lutheran church and an ardent disciple of the teachings of the protestant theologian Friedrich Schleiermacher, Mendelssohn composed a substantial number of sacred motets. Much of his choral music has been ignored in recent decades as it is seen as “as an example of easy-going Christianity that is more sentimental than deeply felt.” Yet, his sacred choral music should rightfully be considered among the most important works in his compositional oeuvre. “On New Year’s Day,” for eight-voice mixed chorus, is the second in a series of short choral settings of Biblical passages called proverbs. The two settings for Christmas and New Year’s Day date from late 1843 and were composed for the cathedral choir in Berlin. Mendelssohn added two more pieces for Passion Sunday and Good Friday in 1844. Responding to a commission from Frederick William IV in May 1846, Mendelssohn composed two further proverbs. In October of that year he had composed one for each of the major high feast days: Advent, Christmas, New Year’s Day, Holy Week, Good Friday and Ascension. Although Mendelssohn originally planned to immediately release the collection, he suddenly, and for unknown reasons withdrew it from publication. Op. 79 was eventually published posthumously in 1849.