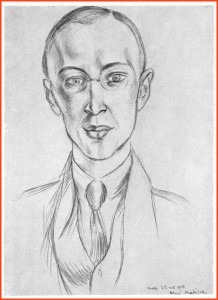 The piano was the prominent vehicle for Sergei Prokofiev’s musical expression. In the tradition of the great piano virtuosos of the 19th century, he was initially looking to impress his audiences with his considerable keyboard skills. Igor Stravinsky attended a “Prokofiev Evening” on 31 December 1908, and later commented on a performance of Prokofiev’s Op. 4: “It was remarkable—but I have always liked his music hearing him play it—and the music had personality.” And a critic wrote, “If one views all of these rather confused compositions as a test of the composer’s pen, then perhaps here and there one may find a trace of talent in them. One can detect a great and indisputable yet unstable talent surrendering to every passion, enamored of extravagant combinations of sound.” His Opus 4 was written shortly after the Op. 1 Piano Sonata, making it one of the earliest works whose publication was sanctioned by Prokofiev.

Sergei Prokofiev: Four Pieces, Op. 4
In the first quarter of the 20th century, Paris was abuzz with Sergei Diaghilev and the Ballets Russes. Diaghilev’s most notable composer collaborations had been with Igor Stravinsky. Les noces and Pulcinella eventually followed up high-profile productions of The Firebird, Petrushka, and The Rite of Spring. Prokofiev, who had already acquired a reputation as the newest sensation of Russian music, went out of his way to meet Diaghilev in London. Diaghilev was suitably impressed and commissioned the young composer to write a ballet with a prehistoric scenario. Ala and Lolli was completed in early 1915, but rejected by Diaghilev “as being too close in spirit to Stravinsky’s Rite of Spring.” Diaghilev did commission a new ballet from Prokofiev, but before fulfilling that commission the composer condensed the most effective numbers of the rejected balled into his Scythian Suite. In the words of a critic, “the vivid colors and instrumental effects attest to one of the most brilliant orchestral essays of its era.”

Sergei Prokofiev: Scythian Suite
Sergei Prokofiev openly welcomed the Bolshevik Revolution of 1917. Although he initially contemplated to add his revolutionary musical voice to the political and social expressions of Russian dissent, he nevertheless sought permission to go abroad. He managed to secure an exit visa from the ‘People’s Commissar of Public Education,’ and arrived in New York in the fall of 1918. Since Prokofiev was determined to exclusively focus on interpreting his own compositions, he initially declined a 1919 commission from the Jewish émigré ensemble Zimro (Singer). The ensemble, collecting funds for the creation of a music conservatory in Jerusalem, was looking for repertory that would support the unusual instrumentation—String Quartet, Piano and Clarinet—of their musical group. Eventually the composer relented, and the Overture on Hebrew Themes premiered with Prokofiev at the piano on 20 January 1920.

Sergei Prokofiev: Overture on Hebrew Themes, Op. 34
Sergei Prokofiev described his two-year tenure in America as a gradual process of failure. Much of his disappointment stems from the fact that the American public could not come to terms with his opera The Love for 3 Oranges. Originally based on an Italian play in the traditions of Commedia dell’Arte by Carlo Gozzi, Prokofiev’s satirical fairy-tale opera was commissioned by the Chicago Opera in 1918. Internal squabbles and posturing almost sunk the opera before it even reached the stage. And when it eventually reached the stage on 30 December 1921, it was described as “Russian jazz with Bolshevik trimmings.” Indeed, critics found “no real music” in the score at all, and when the Chicago production moved to New York in February 1922, rejection was unanimous. Only after the opera had successful runs in Europe and in Russia, did it return to the United States in 1949.

Sergei Prokofiev: The Love for 3 Oranges