Composers Love
One heart and one soul!
Ottorino Respighi and Elsa Olivieri Sangiacomo
by Georg Predota May 10th, 2016 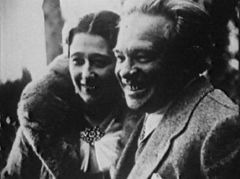 Tendonitis or related inflammations have ruined the aspiring careers of numerous young hopeful pianists. True to life, however, with one door of opportunity closing forever another door is just a likely to open up. Elsa Olivieri Sangiacomo grew up in Rome and Florence, and her proud parents quickly realized that their daughter had tremendous musical talents. She started on piano lessons, and once the family moved back to Rome, she enrolled at the National Institute of Music, directed by Pietro Mascagni. Mascagni, who had achieved fame as a highly successful and popular opera composer suggested, “This child will be talked about in years to come.” Elsa was busy preparing for the competition to enter the famed “Santa Cecilia Conservatory” in Rome, when Giovanni Sgambati, a protégée of Franz Liszt, noticed her. He took over her piano lessons for free, but just as she was ready to give her debut at the Russian Embassy, acute neuritis in her right forearm put a sudden and cruel stop to her pianistic ambitions. Looking for career alternatives, Elsa decided to enroll in harmony, fugue and composition courses at Santa Cecilia instead. While Remigio Renzi took care of the harmony and fugue lessons, the rising star of the Italian classical music scene taught the composition courses. His name was Ottorino Respighi, and Elsa confessed to being in love with him at first sight!

Initially, Respighi was foremost attracted by Elsa’s talents as a singer, composer and scholar. Yet, finding intellectual and musical commonality quickly aroused romantic feelings as well. Although Respighi usually panicked at the thought of marriage, and no one believed he would ever get married, he nevertheless asked for Elsa’s hand. Elsa recalled later, “I warned him that I was so different, and that, among other things, I could not get up as early in the morning as he did.” Yet at the beginning of 1919, wedding bells were ringing! Following the wedding, Elsa completely abandoned her activities as a composer and pianist, and formed an artistic partnership with her husband. Ottorino and Elsa, nicknamed the “small voice” would eventually perform together in over 300 concerts! The musicologist Alberto Gasco listened to their musical debut and wrote, “Elsa Olivieri Sangiacomo, few months bride of Ottorino Respighi, has a most decisive personality and character. Her full success as a musician is certainly not far away.” However, Elsa was not merely part of the performing duo, she also was Respighi’s confidant, his editor and his muse. 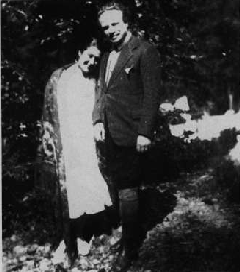 In fact, Elsa took an active part in the compositional activities of her husband. As she later wrote in her memoirs “Generally, after having written something, he would call me to his studio to hear my criticism. If it was a vocal composition, I would obviously go through all the parts…Respighi always respected my judgment. I was always objective and sometimes I needed to tell him, ‘You know, I think there are eight bars too much here,” and a few days later he would come back and say, ‘You were right, Elsa.” We worked together this way all the time. Our marriage was a perfect union, and we mutually respected our totally different personalities. We never tried to interfere with each other’s tastes or wishes. This was the way we were made and we were destined to live together in total happiness.” Elsa’s influence also emerged in other ways, as she introduced Ottorino to Gregorian plainchant, and thus inspired a number of important compositions. When Respighi unexpectedly died in 1936, Elsa resumed her career as a composer. Besides composing a number of original pieces, she also completed works left unfinished by her late husband. Elsa also authored her husband’s biography and wrote her own memoirs. She prepared and oversaw theatrical performances of Respighi’s operas, and founded the research institute “Fondo Respighi” in Venice. Ceaselessly promoting the legacy of her late husband, Elsa tirelessly worked to overcome a perceived neglect of Respighi’s oeuvre. “His artistic personality,” she writes, “has not been considered seriously yet—not even by the critics.”
Ottorino Resphighi: Concerto Gregoriano