In Tune Arts
An Artist at the Opera: Cecil Beaton
by Maureen Buja May 8th, 2016 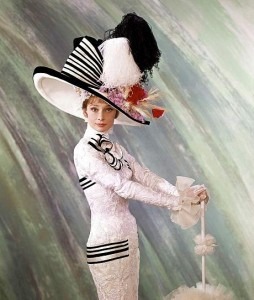 Audrey Hepburn as Eliza Doolittle in the film My Fair Lady

When we think of the artist Cecil Beaton, we think, perhaps, of two things: his photographs and his designs for the Broadway and film productions of My Fair Lady.

What we may not remember were his designs for Turandot at the Met in 1961 and later Covent Garden (ROH) in 1963. In 1961, he was part of the team that brought Turandot back to the Met after a 30-year absence. It was said that the reason for the absence was the lack of a true soprano who could handle the role and in Birgit Nilsson, they had finally found their icy Princess. Calaf was sung by Franco Corelli, who was equally impressive and had only made his Met debut a short time earlier. 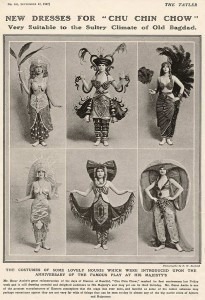 Harold Schonberg, in reviewing the opera for the New York Times noted: ‘It was a handsome production, full of color, elaborate costumes and scenery. The Metropolitan Opera did not stint. Handsome blues, golds and bronzes dominated the stage. The singers were made up à la chinoise without veering into the Mikado or Chu-Chin-Chow style. This is one of the best shows in town as it turned out.’ 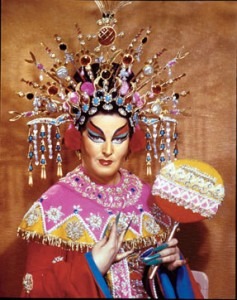 The reference to Mikado and Chu-Chin-Chow style were references to Japanese and Chinese or Indian (or Asian in general) designs for the stage that were more exotic than true to the real national style.

Beaton’s designs for Turandot are more like Chinese opera costumes than the pseudo-oriental stylings usually seen on stage at that time. 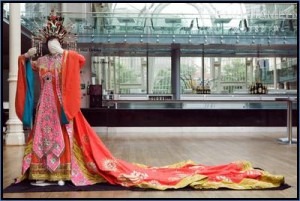 You need to see the full gown, however, to get a real idea of what Beaton was designing: the train looks to be over 2 meters in length alone. 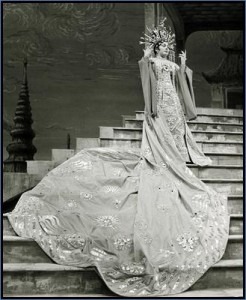 Turandot, is of course, an opera about ancient China, which came to Europe via a 12th-century Persian poet in his telling of the story of Turan-Dokht (The Daughter of Turan). Carolo Gozzi made a 1762 commeddia dell’arte play of the story, Friedrich Schiller made a play in 1801 of the story, and Puccini took it up as an opera in 1920. It was left unfinished at his death in 1924 and was completed in 1926 by Franco Alfano. What Beaton brought to the opera was a design that was impressive in itself – one critic called his staging ‘evocative and eminently practicable’ – but which did not upstage the music that Puccini wrote

See here for an overview of his sketches for the ROH production, along with fabric samples.

We close with the great aria by Calaf from the final act of Turandot: ‘Nessun dorma!’.