Composers Anecdotes
Minors of the Majors
Frédéric Chopin: Variations on a Theme by Rossini, B. 9
by Georg Predota February 1st, 2016
Tags: Chopin 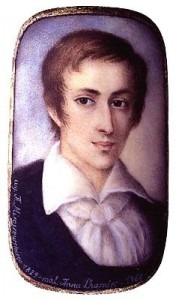 Unless your name is Mozart, Mendelssohn or Korngold, the first compositional steps are always the hardest. Chopin was probably no older than 14 when he set to work on a set of variations for piano and flute. Already in love with opera, he decided on the happy- ending aria, “Non più mesta” (No longer sad) from Rossini’s opera Cinderella. As the curtain comes down, Cinderella gleefully warbles, “No longer sad beside the fire shall I sit alone, singing; my long years of heartache were but a streak of lightning, a dream, a game.” We are unsure what actually prompted Chopin to select this for his unique combination of flute and piano, but it was most likely written for the composer’s father who was a capable amateur flute player. In the end, the piece was probably dedicated to Józef Cichowski, a close friend of his fathers and an amateur flautist as well. We are indeed fortunate that this early piece of Chopin juvenilia has actually survived, as Jozef Nowakowski, one of the composer’s friends, kept the single manuscript copy as a memento. For one reason or another, the work did not appear in print until 1953.This charming and fluent set of variations presents the theme and four decorated versions of the original tune. Added triplet figuration enlivens the first variation, while the second relies on a florid bel canto style to embellish the theme. Rapid downward arpeggios propel variation three, and the concluding variant displays rapid staccato figuration. Stylistically, there is nothing in this composition to suggest Chopin’s hand. You certainly won’t hear Chopin’s fingerprint in the piano part, as all the interesting bits are given to the flute. In addition, it’s the only Chopin piano part that can comfortably be played by most amateurs. Clearly, the future poet of the piano had a long way to go!

Frédéric Chopin: Variations on a Theme by Rossini