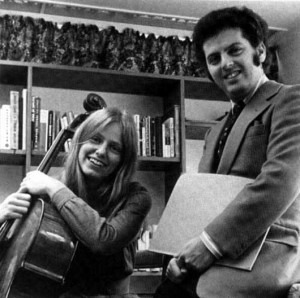 What could be more romantic—a Valentine’s Day feature of our favorite classical musicians who popped the question and who make great music together both on and off stage?

One of the most spectacularly talented couples was cellist Jacqueline Du Pré and pianist and conductor Daniel Barenboim. They met in 1966 and were married in Jerusalem the following year during the Israel 6-Day War. We are blessed with the beautiful music they made together—recordings of cello and piano sonatas, such as the glorious Brahms Sonata in F major, as well as chamber music. Du Pré was known for her definitive and masterful recording of Elgar’s Cello Concerto. Tragically she was diagnosed with multiple sclerosis and passed away in 1987.

Du Pré and Barenboim play the Brahms Sonata in F

Since then few artists have had the impact of Daniel Barenboim, known for his pianistic artistry and musical intellect, Music Director of L’Orchestre de Paris, Chicago Symphony, and currently the maestro of La Scala in Milan, the Staatsoper Berlin, Staatskapelle Berlin and the West-Eastern Divan Orchestra, which he co-founded. He has received numerous awards for his efforts toward peace and human rights. 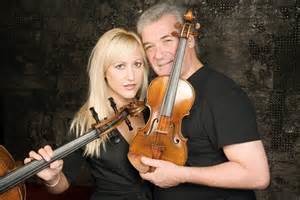 Daniel Barenboim fell in love with Russian pianist Elena Bashkirova and they have been married since 1988. Bashkirova is a world-renowned soloist, the founder of Berlin Metropolis and is artistic director of the Jerusalem International Festival of Chamber Music. They have two sons and Bashkirova plays often with Michael Barenboim, a classical violinist.

What is it about string players that “send” conductors? International star Pinchas Zukerman is known for his sizzling violin and viola artistry, for his conducting, teaching and his chamber music performances. He was the music director of the Saint Paul Chamber Orchestra from 1980-1987 and the National Arts Center Orchestra for seventeen seasons. There he encountered the enchanting principal cello Amanda Forsyth. Now married for fourteen years, Pinchas admits to his weakness for sexy blondes. Pinky’s broad shoulders and exceptional talent attracted Amanda. Their smoldering photos and performances together tell it all! A Juno award winning Canadian, Forsyth was born in South Africa, trained in London and New York and is a founding member of the Zukerman Chamber Players. She plays internationally on an exceptional Italian Testore cello from 1699. 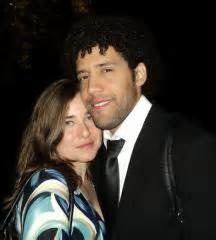 Another maestro-cellist relationship is that of Venezuelan conductor Rafaél Payare and Alisa Weilerstein. Married in 2013, Weillerstein, a MacArthur “genius grant” recipient, comes by her talent honestly. She is the daughter of violinist Don Weilerstein a founding member of the Cleveland Quartet. Alisa’s recording of the Elgar and Elliott Carter cello concertos with the Staatskapelle Berlin, Daniel Barenboim conducting was named, “Recording of the Year 2013” by BBC Music. Payare swept her off her feet during a concert tour.

Like his friend Maestro Gustavo Dudamel, Payare is a graduate of El Sistema. He was recently appointed Principal Conductor of the Castleton Festival in Virginia taking over from the late Lorin Maazel, his mentor, and is the Chief Conductor of the Ulster Orchestra. Payare has made debuts with the Vienna Philharmonic, London and Chicago Symphonies. Alisa recently announced that she and Rafael are expecting a baby next spring.

The charismatic Montreal native, maestro Yannick Nézet-Séguin, partial to form fitting sweaters, skinny jeans and a winning smile, shares his spectacular career with his partner of eighteen years, Pierre Tourville, assistant principal viola of the Montreal Symphony. Nézet-Séguin decided he wanted to be a conductor at age 10 and his meteoric rise is due in part to the seductive chemistry with the Philadelphia Orchestra and the Rotterdam Philharmonic where he was appointed by a unanimous vote. His discography is enough to knock your socks off—everything from Nino Rota to Mahler, Bruckner to opera. Nézet-Séguin and Tourville celebrate the accolades together. 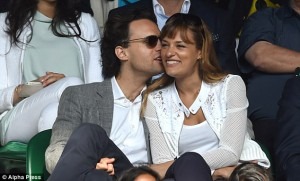 Chats about musical nuptials must include two hot duo couples: Pianist Wu Han and cellist David Finckel “the power couple of chamber music” are the artistic directors of the Chamber Music Society of Lincoln Center, and the festival [email protected] (they even share a website). Born into a family of cellists, Finckel was a long-time member of the Emerson Quartet. He and Taiwanese-born Wu Han were married in 1985 and their collaborations include the complete Beethoven Cello Sonatas. And encore-pieces such as Rachmaninoff Vocalise.

Another alluring couple, violinist Nicola Benedetti, one of the most sought after violinists of her generation and enthralling cellist Leonard Elschenbroich, find that at least when they play works for violin and cello such as the Brahms Double Concerto they can be together. Their eight-year relationship was the catalyst for a new work by composer Mark-Anthony Turnage—Five movements, love duets, for violin and cello. With booking years in advance they compete for rehearsal space in their flat but practicing has to stop by 10:00 p.m. to placate the neighbors.

Love conquers all but music’s telepathic language, which has the ability to transcend words, has enhanced the lives of these divine duos.