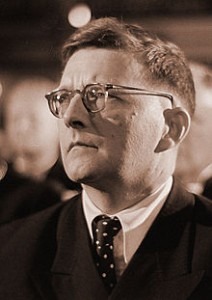 In the immediate aftermath of WWI, Western Europe fell under the spell of popular American musical styles. As such, Jazz brought an indisputable ingredient to the formation of a musical language increasingly places at the service of social commentary. Infusions of popular elements from Jazz permitted not only a sense of entertainment and escape but also the capacity—sometimes blatant, sometimes veiled—for the pronouncement of moral judgements. The Soviet Union, on the other hand, eyed Jazz as an undesirable import of Western culture. Stalin unceremoniously decreed that all “light music” would be under the control of the party. Nevertheless, Dimitri Shostakovich (1906-1975) managed to compose two suites—both in three movements and dating from 1934 and 1938 respectively—that unabashedly payed homage to the growing importance of popular musical styles. Until recently, an eight-movement Suite for Variety Orchestra had been misidentified as Shostakovich’s second Jazz Suite. In fact, this compilation appears to have been assembled after 1956 as it uses material from that year’s film music to The First Echelon. Much of the remaining music is a collection presenting musical excerpts from earlier film and ballet music. It is unknown whether this Suite was ever performed in its entirety in the Soviet Union, and it only came to the West in the late 20th century. It was first performed, under the direction of Mstislav Rostropovich, at Barbican Hall on 1 December 1988. You might certainly be familiar with the “Waltz II,” which featured on Stanley Kubrick’s film Eyes Wide Shut. It projects the smoky atmosphere of the public dance hall, a place contemporary clergy classified as “an agency established by Satan, where dark rites are enacted.” Whatever your personal associations, with his jazz arrangements Shostakovich helped to create an international folk music of the broadest possible consequences.