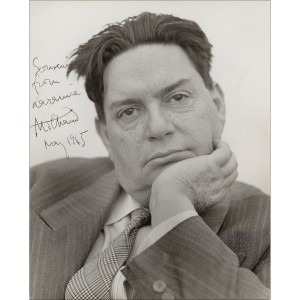 In his mid-20’s, Darius Milhaud was already an international musical superstar! His Brazilian-inspired Le boeuf sur le toit and the jazzy La création du monde had propelled him to instant international stardom. His musical direction was well established early on, as he writes, “My musical education was influenced exclusively by the Latin-Mediterranean cultural milieu, which is readily explained by the fact that I come from a very old Jewish family from the Provence. Southern and, in particular Italian music has always meant a lot to me; German music, virtually nothing.” Throughout his career, he wrote some 400 compositions, 443 to be exact, in a substantial diversity of styles and techniques. Every sensual impression, it seems, was immediately encoded in musical terms. His approach undoubtedly paved the way for the musical eclecticism of the 20th-century. “I have no aesthetic rules, or philosophy, or theories. I just love to write music.” As such, he did not make a big deal when it came time to compose his 100th opus. Instead of writing a great symphony or a lengthy ballet production, he composed a modest Sonatina for clarinet and piano. Written during the summer of 1927, the work is dedicated to clarinetist Louis Cahuzac, who gave its premiere in 1929. But don’t be fooled, this is no whimpering salon piece but a dry and robust work that focuses on the playful treatment of the solo instrument. Outer movements that liberally employ polytonality and dissonant sonorities bracket an exceptionally melodious and tranquil middle movement. Simultaneously virtuosic—have a close listen to the hyperactive piano in the final movement—and sophisticated with just a touch of bluesy harmonies, this brief work underscores Milhaud’s positions as one of the most versatile composers of the previous century.