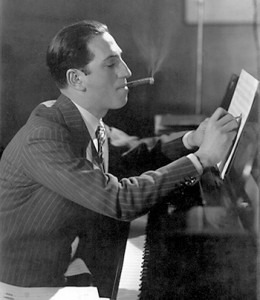 The son of poor Jewish immigrants, George Gershwin, could hardly have dreamt that his Rhapsody in Blue would single-handedly propel him to world fame. Within a couple of years of the premier performance on February 12, 1924, several million copies of the recording had been sold, and when Gershwin traveled to Vienna in 1928, the house orchestra at the famous Café Sacher spontaneously played the opening of the Rhapsody in Blue as he entered. Gershwin claimed to have composed “a sort of musical kaleidoscope of America, of our vast melting pot, of our unduplicated national pep, of our blues, our metropolitan madness.” Gershwin’s musical smorgasbord of combining elements from classical music with jazz influences fuelled a deep infatuation with American popular musical styles on the European musical landscape. And in 1926, he followed up with his Three Preludes.

A Vanity Fair article in March 1925 claimed, “Gershwin was working on a suite of twenty-four piano preludes, to be called “The Melting Pot.” In the end, Gershwin published only three piano preludes during his short lifetime. On 4 December 1926, Gershwin gave a joint recital at the Hotel Roosevelt with an English/Peruvian contralto named Marguerite d’Alvarez. The concert was to be an experimental juxtaposition of highbrow and popular music, with d’Alvarez singing art songs and then Broadway numbers. Gershwin premiered his two-piano version of Rhapsody in Blue, and five preludes for solo piano. When the concert was repeated on 16 January 1927, the composer played not five but six preludes! This sixth prelude is sometimes called “the lost prelude,” and may well be based on a 1924 sketch.

Be that as it may, the blues decisively influences the “Allegro ben ritmato e deciso,” and the syncopated rhythms provide a strong jazz feel. A seductive melody above a smooth and steady bass-line initiates the second Prelude. Gershwin himself referred to this piece as “a sort of blues lullaby,” and after a highly contrasting middle section, this prelude returns to the opening materials. Marked “Agitato,” the final prelude, which Gershwin called “Spanish,” features a brief and dramatic introduction followed by a pair of contrasting melodies.