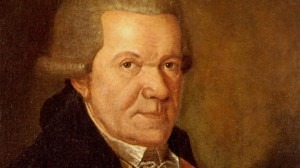 In the 1920’s, Hans Gál was the rising star of the Austro-German music scene. His operas were successfully performed around Europe, he was appointed Director of the Conservatory in Mainz, and he was called upon to work on the complete edition of the works of Johannes Brahms. However, when Adolf Hitler seized power in 1933, Gál and his family were forced to leave Vienna, eventually settling in Edinburgh, Scotland. Gál was invited by the distinguished musician and scholar Sir Donald Tovey to catalogue the library of the Music Faculty at the University of Edinburgh. Working at the Reid Library in Edinburgh, he found a set of parts of an unknown symphony in B flat, bearing the name G. Haydn and printed by Bremner in London. Gál writes, “My curiosity was aroused by a few bars that bore familiar and unmistakable features of Haydn’s invention. After having scored the first movement, I no longer had any doubt about the authenticity of the music.” Previous scholarship had assigned this symphony as number two in a set of “Three symphonies by Giuseppe Haydn, Op. 10” first printed in Amsterdam. Gál was aware, however that L.H. Perger had attributed the work to Michael Haydn. Nevertheless, untangling a number of erroneous readings and attributions, he concluded. “To me as a musician the main proof of Haydn’s authorship lies in the music itself. Features like the second theme of the first movement, the lovely, slender quartet setting of the Andantino, the sparkling skill in developing a whole movement out of a small motif of three notes in the finale—these are unmistakable fingerprints.” Gál was convinced that he had re-discovered a symphony by Haydn, and published his findings in 1939. And of course he was correct, however, instead of being a minor work by Joseph Haydn, it eventually did turn out to be a major work by his brother Michael Haydn. Nobody says that music scholarship is easy!