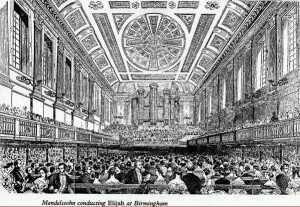 The Birmingham Music Festival was founded in 1768 as a charitable event to raise funds for the city’s recently founded General Hospital. Renamed the “Birmingham Triennial Music Festival” in 1784, it subsequently commissioned works by Arthur Sullivan, Max Bruch, Charles Gounod, Antonín Dvořák and Edward Elgar. But the composer with the longest and most intense Festival association was Felix Mendelssohn. 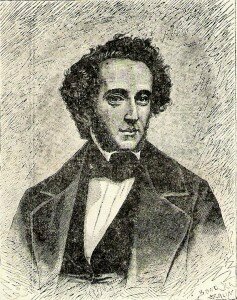 He conducted a performance of his St. Paul oratorio in 1837, and performed as the soloist at the premiere of his second Piano Concerto, commissioned by the Festival. He also featured as the soloist in his first Piano Concerto, and in 1845 the Festival commissioned a new work. Mendelssohn had long contemplated an oratorio based on the biblical narrative depicting events in the life of the prophet Elijah. As such he asked Julius Schubring, who had already crafted the libretto for his oratorio St. Paul, to produce the text. 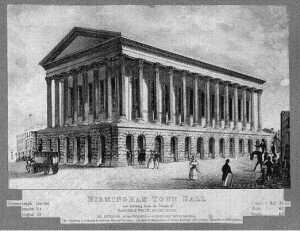 On 26 August 1846 a huge crowd gathered at Birmingham Town Hall to hear the composer conduct an orchestra of 125 players and a chorus of 271 voices. The work was a resounding success, and Mendelssohn wrote to his brother, “No work of mine ever went so admirably at its first performance, nor was received with such enthusiasm by both the musicians and the audience. I was able to sway at will the enormous mass of orchestra and choir and organ … No less than four choruses and four arias were encored.” And the critic for The London Times wrote, “The last note of Elijah was drowned in a long-continued unanimous volley of plaudits, vociferous, and deafening. Mendelssohn, evidently overpowered, bowed his acknowledgements, and quickly descended from his position in the conductor’s rostrum; but he was compelled to appear again, amidst renewed cheers and huzzas. Never was there a more complete triumph — never a more thorough and speedy recognition of a great work of art.” None withstanding its enormous success, Mendelssohn thoroughly revised the entire composition for another set of performances in London in 1847. Mendelssohn died a year later, but Elijah was played at every successive Birmingham Festival!