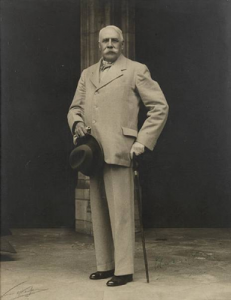 It’s always been fashionable to emphasizing artistic greatness at the expense of some more down-to earth-human qualities. Mozart wrote exceptional music but he also wrote scatological letters to his cousin. Wagner gave us the Artwork of the Future and a number of anti-Semitic diatribes. Chopin dabbled in nocturnal moods and also in opium, and Brahms picked up streetwalkers outside the Vienna Opera House. And this brings us to Edward Elgar, who by all accounts wasn’t a very nice human being. Beth Tree was first violin in Edward Elgar’s The Dream of Gerontius at the Three Choir Festival in Worcester. “He was such a flirt,” she recalled. “He was forever giving me the eye. And when I was given the first violin part in his Symphony, he told me that it was mandatory that I wear blue knickers for the occasion. Imagine how I felt when he said that. My face was scarlet.” And when Beth was asked whether she wore the requested undergarment, she reported, “Yes, and just as well I did, for before the performance, when he was giving us a pep talk, he took his stick and lifted my dress to ascertain if I had followed his instructions.”

Elgar appears to have been a habitual skirt-lifter, as Kathleen Stovold recalls. “Elgar would ask all the ladies into an ante-room and he would be with us on his own. He would ask us to sing a few notes, tell us how to stand and then use his stick. He was an indecent and repulsive Man.” And Mrs. Edgar Wood of Bromley vividly recalls that after one such inspection Elgar said to her, “Well, you’re no Virgin Mary!” Apparently he made the same comment to Emma Rowland. Since a substantial number of women have confirmed the story, we assuredly are dealing with a serious “navy-blue knickers” fetish! This only leaves the question whether Elgar had any artistic talent. Opinions seem sharply divided, but according to Maurice Ravel “Listening to Elgar is a marvelous way to catch up on your sleep,” and Herbert von Karajan quipped, “I don’t know what is the best part of any Elgar work. The silence before it starts or the tremendous relief when it is all over.” There really is no need to let Ravel or Karajan influence your opinion; all you have to do is get beyond the “blue knickers.”