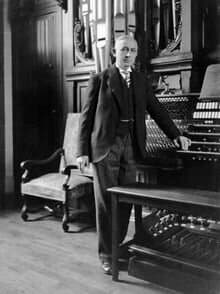 In 1925, Marcel Dupré (1886-1971) bought a large house in the Parisian suburb of Meudon. He quickly installed a house organ that had once belonged to the revered organist Alexandre Guilmant (1837-1911). Aristide Cavaillé-Coll originally built the instrument in 1899, and Dupré modified it by adding a fourth keyboard manual. In order to house this impressive instrument, Dupré had a richly decorated auditorium constructed. Even today, it is the biggest private organ in Europe. Students from all over the world pilgrimaged to the Dupré mansion to receive lessons and participate in house concerts. Physically placing the organ away from its usual liturgical spaces allowed Dupré to experiment with genres and forms that are more readily found within a chamber music content. Such is the case with the Quartet for violin, viola, violoncello and organ, Op. 52. With great sensitivity and imagination Dupré explores the soundscape offered by this rather unusual combination of instruments. 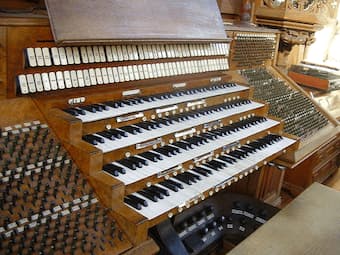 Dupré’s compositions always reflect his equal concern for the liturgical and concert roles played by the instrument. However, he actively looked for ways of “bringing the organ into the realm of music in general.” It had long been assumed that the vast size of the organ made it an unsuitable partner for the delicate dialogues of a chamber music performance. As a scholar, Dupré was well aware that throughout the 19th century music salons housed not only pianos and harmoniums, but also organs of various sizes. This fostered a vast repertoire for instrumentalists and vocalists accompanied either on the piano, harmonium and the organ. Dupré forged new experimental paths, trying new combinations of sounds, instruments, and dialogues. His style of composition, however, remained unchanged as he mixes the emotional sensitivity of late Romanticism with the sense of formal clarity of Neo-Classicism. Written late in life, the Sonata for cello and organ Op. 60 is dedicated to Paul Bazelaire, his colleague at the Paris Conservatoire. “It is the only French sonata for organ and another instrument.” 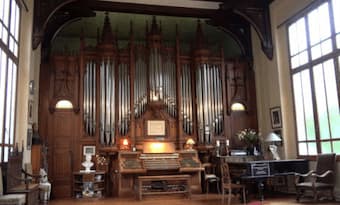 Dedicated to Louis Chacaton, his colleague and assistant director at the Paris Conservatoire, the Trio for violin, violoncello and organ, Op. 55 is “elusive in structure and advanced in harmonic language.” Incorporating the organ within the chamber music context poses a number of problems. Each and every organ is unique and its sound greatly influenced by location. The sound of the instrument, the acoustics of the space and the fluency differ greatly from one location to another. As such, every performance of this Trio forces organists to renew their approach to the composition. It takes a good deal of experimentation for the organ to become an equal partner to the demanding lines of the stringed instruments. 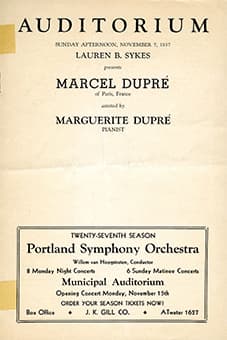 Concert programme of Marcel Dupré
with his daughter Marguerite

Dupré’s daughter Marguerite was an exceptional pianist and she shared the stage with her father on a number of occasions. In fact, she made her American debut in 1937 in an extraordinary composition for piano and organ written by her father. Pianos and organs are rarely heard together, but the combination is far from new. Johann Sebastian Bach is known to have performed concertos for two or more keyboard instruments “using a mixture of organs, harpsichords, clavichords and possibly early pianos.” However, the encounter and discourse of the modern piano with the organ offers a fascinating and unique sound spectrum. Dupré composed three works for joint performances with his daughter, and they all originate at his home in Meudon, as the location feature the home organ and two grand pianos. His Variations on Two Themes pays homage to the Russian composer Alexander Glazunov, who had recently passed away. The composition “cleverly combines the technical and musical sides of the two instruments…alternately engaging in harmonious dialogue or an acrimonious race towards the finishing line.”