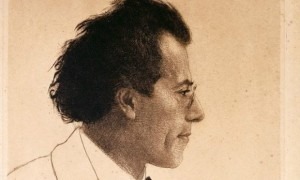 The problems with performances in the age of Covid is that the large orchestral works are just too dangerous to assemble. In Erwin Stein’s 1921 arrangement of Mahler’s Symphony No. 4, created for Arnold Schoenberg’s ‘Society for Private Musical Performances,’ the performing forces are reduced to one per part: two violins, viola, cello, double bass, flute, oboe, clarinet and piano. There are also several percussion instruments (the sleigh bells are critical) and then filled out the sound with a concert reed organ (harmonium). The soprano enters for the final movement. 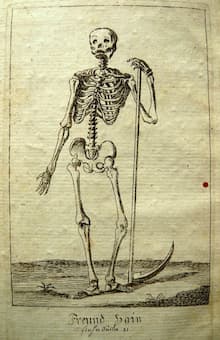 The result is a beautiful small symphony – it doesn’t have the volume and sound of a typical Mahler symphony, or even of the smaller Mozart and Haydn symphonies. It preserves Mahler’s unique sound, but in miniatures.

Mahler’s Fourth Symphony, completed in 1900, followed the example of the previous 3 symphonies in taking its inspiration from Des Knaben Wunderhorn, and the soprano’s text in the final movement follows this as well.

This symphony was a light relief after the enormous Symphony No. 1, Titan, Symphony No. 2, Resurrection, and Symphony No. 3, the longest in the standard repertoire. From the first notes, with the addition of the sleigh bells for emphasis, we’re in a different world. Lighter, more dance-like, with Mahler’s unique sound contributing to the effect.


The second movement scherzo has as its central conceit a dance between the orchestra and the solo violin, whose strings are tuned a whole tone higher than usual, which represents Death. In medieval German art, Freund Hein, the ‘friend who cannot be turned away,’ was a common euphemistic and allegorical metaphor for the personification of Death. Here, the solo violin becomes the dancing Freund Hein, leading the dance of death. For Mahler, the inspiration for this movement came from a painting by the Swiss artist Arnold Böcklin: Self-Portrait with Death Playing the Fiddle (1872)


The slow movement is a variation set based on a slow march. 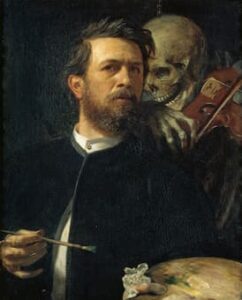 The final movement, where Mahler has taken a text from Des Knaben Wunderhorn and set it for soprano voice, we are given a child’s view of Heaven and the feast being prepared. It’s a dangerous text, though. In the guise of a simplistic story about all that can be seen of the feast and about enjoying heavenly pleasures, when you examine the text, the saints are killing or exploiting their attributes: John the Baptist releases the lamb for the butcher, Saint Peter goes fishing (catching fish rather than preaching to them), St Luke slaughters the ox with no concern, and St. Ursula sets her 11,000 virgins to dancing to music played by St. Cecilia.

What’s wonderful about the chamber orchestra version of the symphony is that, for the first time, the soprano can take her own part, rather than having to fight against the entire orchestra to be heard.


When you compare it to a normal full orchestra recording, you can hear where the soprano has a hard time being heard, and how the whole orchestra has to pull back to give her exposure.


Hearing the chamber version of this beloved symphony was a revelation – we are so used to hearing Mahler’s music as large, larger, largest, that to hear it as a small work that could be played by 10 people plus percussion gives you the opportunity to revel in Mahler’s sound. His orchestration that uses each instrument for its true value opens the orchestra to a new level of appreciation.