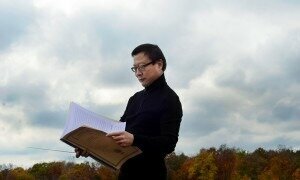 In four years’ time, the Intimacy of Creativity has grown from a university arts project to a widely sought after chance by emerging young composers to come to Hong Kong and get creative with renowned pianist, composer and founder of the IC, Bright Sheng. At the close of the successful event last month, Sheng sits down with Interlude to reflect on how far the project has come.

Is the Hong Kong University of Science and Technology establishing itself as a leading arts institution?

It certainly has become a signature banner for HKUST. The university is not known for arts, and a lot of factors went into it to make it happen. The administration is very supportive, and they believed that in a university like this we really needed a higher research and arts project. It was made possible because of Helmut Sohmen, a donor who gave money to HKUST years ago specifically for arts projects – not arts education, but arts projects.

But it’s not only for HKUST. The university is quite isolated, so we give a preview concert here, and then we give another concert downtown for the public. I think we have established ourselves as an important arts event in Hong Kong.

What are your criteria for selecting Composer Fellows?

We had almost 200 applicants this year. I don’t have an agenda on what kind of music style I like because I myself have gone through many styles, but I would say expression is very important. I don’t like a dry composition where it is just a mathematical, abstract idea. I want to be impressed by its expressivity. The piece needs to have communication power with the audience. So if you listen to our pieces, they are all quite different in terms of styles, but they all have this common link, this quality where they can express themselves by communicating with the audience.

Did the Composer Fellows find it hard to make changes in a week’s time?

Everybody got a bit of shock. They all expected some gentle discussion but they didn’t expect to tear their pieces apart. It’s healthy to have this kind of mindset. Other people might have some very good ideas about your music.

The first week we had three composers. We would rehearse, and then have two open discussions. On the first day, I told them to make some revisions but they said they didn’t have time to do that. I got really upset so in the second discussion and in front of all the students in public, I said if you do this, we will cancel the piece from the programme. They all did it the next day.

They could decide not to keep the change later. It’s all in the computer, you can click and it all goes back to the original version, but most of them said they want to keep this new version.

What opportunities does the IC offer to Composer Fellows after the event?

This year, we went further, we went outside of Hong Kong. The winner will go on a two-week all expenses paid trip to Canada, in collaboration with the Banff Centre for one of the biggest festivals there. For 2015, we have plans to bring the winner to the Beijing Modern Music Festival. So it’s all very exciting for the Composer Fellows.

At this year’s IC, you also discussed and reinterpreted works by Brahms and Schoenberg.

Schoenberg’s Verklarte Nacht, Op. 4, is a tonal piece, but the piece has a problem – it’s very long and overtly romantic. If you don’t do it well, it will sag. The performers thought they needed to move quite constantly, do lot of rubato to make it work. In the end they did a great performance.

Brahms Piano Quartet in c minor, Op. 60 also has a problem. Of the three Brahms piano quartets, the c-minor to me is the most delicate and gorgeous piece. I love it the most, but it’s also most problematic. Even Brahms knew that, because it took him a long time, 12-15 years, to finalize it. And still the last movement doesn’t end excitingly, it ends actually quite adventurously. It’s almost as if Brahms is looking forward from his time. You cannot look at it as a typical Brahms piece. In the end we treated the last movement like a Debussy piece. 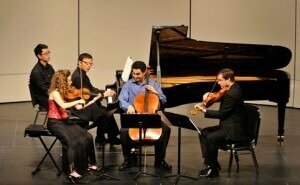 You also brought Derek Bermel and Ye Xiaogang on board.

Ye Xiaogang is one of the most distinguished composers of my generation. We went to school in the US about the same time, but he went back to Beijing and started something really important – the Beijing Modern Music Festival. Derek is a great clarinetist and a composer, I’ve known him for many years. He’s doing very well and he also brought a lot of perspectives into our project.

We discussed their compositions too but their pieces were less focused on making changes. What was important was that they brought in their perspectives as senior performers so it’s not just me talking. Sometimes our points are quite different, sometimes they’re the same. But it’s good to have different opinions, different views. They are all very experienced performers and we’re very glad to have them.

Is there anything you think could have been done better?

I think I would encourage more people to perform. Two years ago, we had a piece by Jonathan Wong, and Austin Yip played it on the violin. It’s good that people play each other’s works. Last year, I told Roger Zare, who was my student in Michigan, that we would select him on the condition that he would perform his own work.

This year the Composer Fellows said they weren’t good enough. We had Andy Akiho perform on the steel pans as an encore piece, but I think I could also have pushed harder for others.

The Intimacy of Creativity 2014 – Testimonial Video