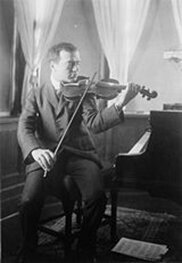 The exceptional Polish violinist Bronisław Huberman never tired of asking Erich Korngold for a violin concerto. Huberman had been an old family friend from their days in Vienna, but having been forced into exile to Southern California, Korngold was determined not to compose concert music as long as the Second World War raged in Europe. His father, the eminent critic Julius Korngold, was sorely disappointed that Erich had given up serious composition in favor of film music, but his son would not relent. Finally, when the war had ended in 1945 Huberman sent his request once more. This time Korngold agreed and set to work. Quickly completing two movements, a rehearsal with Bronisłav Gimpel was arranged but the violinist found the solo part too demanding. In addition, Huberman, who was in very poor health, was reluctant to commit to a first performance date until he had seen the finished work. 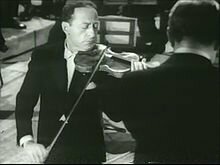 The agent Rudi Polk, who arranged a rehearsal with Jascha Heifetz, finally broke the impasse. Heifetz was immediately enthusiastic and suggested to make the solo part more difficult. Korngold finished the concerto and dedicated the work to Alma Mahler, widow of his childhood mentor Gustav Mahler. It premiered on 15 February 1947 with Jascha Heifetz as the soloist and the St. Louis Symphony under the direction of Vladimir Golschmann. Korngold later wrote about Heifetz’s playing, “In spite of the demand for virtuosity in the finale, the work with its many melodic and lyric episodes was contemplated more for a Caruso than for a Paganini. It is needless to say how delighted I am to have my concerto performed by Caruso and Paganini in one person: Jascha Heifetz.” The work quickly became part of the standard repertoire and one of Korngold’s most popular pieces. Although his father would have strongly disapproved, the Violin concerto borrows thematic material from Korngold’s movie scores in each of its three movements!