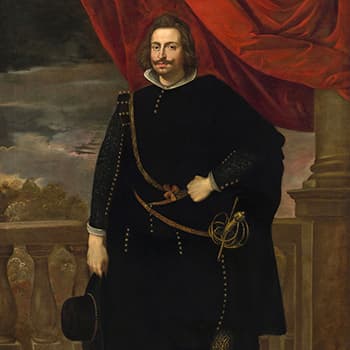 Workshop of Peter Paul Rubens: King John IV of Portugal
and 8th Duke of Braganza, 1630 (The Royal Castle in Warsaw)

João IV / John IV (1604-1656) of Portugal, got the nickname of ‘John the Restorer’ for his freeing of Portugal from Spanish rule. Beginning in 1580, Portugal and Spain were ruled together by the Habsburg Spanish court. Under João, the House of Braganza took the Portuguese throne and separated themselves from Spain. When he died in 1656, the Portuguese Empire stretched around the world with footholds in South America, Africa and Asia.

His family had strong musical interests and João’s own contributions consisted of both music and music criticism. He was a strong advocate of the works of Palestrina and wrote his Defensa de la musica moderna, contra la errada opinion del Obispo Cyrilo Franco (Defense of modern music, against the erroneous opinion of Bishop Cyrilo Franco) and published it in 1649. In an opening statement in the book, the king summarizes his argument: the bishop, in a letter to ‘Cavallero Ugolino Gualteruzio’ held that modern music does not have the same effect as old music. The king, on the other hand, holds that modern music has the same strength as old music and the fault is not of the music or the composer (implying that the fault is in the listener, i.e., the bishop).

João probably studied with Roberto Tornar, mestre de capela at the royal palace of Vila Viçosa starting in 1616. There’s no direct evidence but Tornar’s exceptionally high salary (60,000 réis) and supplement (40,000 réis) are difficult to explain otherwise. Tornar’s predecessor’s salary was only 10,000 to 20,000 réis. After he became King of Portugal, João moved his center from the Vila Viçosa, on the eastern edge of the country, to Lisbon and transferred the riches of the house to his new capital.

Two six-voice motets by João IV, Anima mea turbata este valde and Vivo ego dicit Dominus, survive in a book of sacred music by João Louenço Rebelo published in Rome in 1657, but, unfortunately, only 2 of the 6 partbooks survive.

The only music with his name attached that is still performed is Crux fidelis, which is popular with choirs during Holy Week. Unfortunately, there is no original source for this and the first appearance of the work was in France in 1869. It is generally thought now that the work is a 19th-century creation.


João IV assembled a magnificent library of music, thought to have been second only to the Vatican in size, but it was destroyed in the Lisbon earthquake and fires of 1755. The first part of the index (catalogue) of the library survives, which lists 563 works. Nearly 600 of those works are for five voices or more and 161 of them are eight-part pieces.