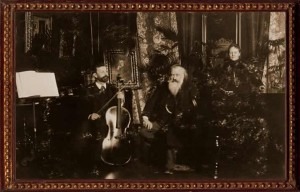 Buying a piano for home use is a highly personal choice. It depends on a number of variables, including instrument style, brand, color and shape. Generally speaking, however, we look for instruments within a certain budget range, and one that complements the technical abilities and musical strengths of the performer. When Johannes Brahms moved to Vienna in the early 1860s, he publically performed on instruments built by Johann Baptist Streicher and Ludwig Bösendorfer. For his personal use, however, Brahms soon opted for the Streicher instrument. Nannette Streicher and her husband Johann Andreas Streicher had built a profitable and innovative instrument at the turn of the century, and their son Johann Baptist continued the family tradition. By 1831 he patented a piano action that was neither “Viennese” nor “English” but sharing features of both types. By the 1860’s Emil Streicher experimented with the latest advances coming from Steinway in New York, and he won a gold medal for an overstrung piano with a one-piece cast-iron frame at the Paris Exhibition of 1867. Brahms received one of newest Streicher models in October 1864 and excitedly wrote to Clara Schumann, “I have a beautiful grand piano from Streicher. With it he wants to demonstrate his latest achievements to me, and I believe that if he made a similar one for you, you would be pleased with it.”

Between 1864 and 1875, Brahms almost exclusively played on Streicher pianos, recommending the instruments to visiting performers and friends. In 1872, Emil Streicher lent Brahms a grand piano with the serial number 6713 for use in his apartment at Karlsgasse 4. The instrument featured leather-covered hammers, Viennese single-escapement action, and parallel stringing. Apparently, the instrument was very easy to play, due in part to a light, fast and shallow action. But Brahms was particularly fond of the instrument’s sound qualities. It featured “a relatively transparent tone which begins with a distinct articulation from the soft-surfaced hammers hitting the strings. The tone is more sustained and mellow, yet lush and full in sound. There is a distinct contrast in tone color between soft and loud, which makes it ease to separate a melody from its accompaniment. As such it was the perfect vehicle for Brahms’s intricate combination of melody and polyphony.” This piano stayed with Brahms until his death in 1897, but the instrument was severely damaged during the Second World War, and today a single piano leg remains. 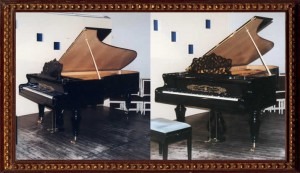 The restored piano, ready for recitals in the Brahmsmuseum

However, we are very fortunate that one of the Streicher pianos Brahms played with regularity has survived the ravages of time. A cross-strung, ebonized and 240cm long Grand with Viennese action and serial number 8105 was, on the recommendation of Brahms, bought by Dr. Richard and Maria Fellinger in 1880. Brahms was a close personal friend and frequently participated in house concerts that featured the clarinetist Richard Mühlfeld or the cellist Robert Hausmann. Brahms even made his famous phonographic recording on that particular instrument in 1889. This instrument remained with the Fellinger family, and Dr. Imogen Fellinger bequeathed the instrument to the Brahms Museum in Mürzzuschlag, located in the Austrian province of Styria. The instrument was restored to its original condition, and is presently the centerpiece in a museum dedicated to Johannes Brahms. It is actively used in a dedicated performance series, and various recordings have been produced. It is without doubt, the most immediate link to the actual sound world of Johannes Brahms.