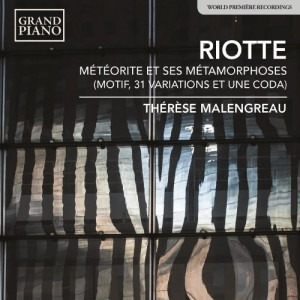 French composer André Riotte was closely involved with experiments in avant-garde music, following in the paths of Messiaen, Xenakis and Barraqué, as well as in group improvisation. He wrote widely for orchestral and chamber forces, but the piano was his central focus and his compositions for it chart his development from early neo-modal works through studies in pure sound, to the monumental inspiration of his large-scale works. Météorite et ses métamorphoses, one of the composer’s last works, is a milestone in contemporary repertoire. Thoroughly organic, it develops as metamorphoses—a term Riotte preferred to ‘variations’—and acknowledges the influence of Debussy, Bach, and Beethoven in his Diabelli Variations.