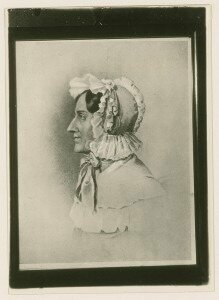 The business of designing and building musical instruments was long in the exclusive domain of men. Or so we have been led to believe! But there was at least one woman who kicked ass in this male dominated world. Her name was Nannette Streicher and she was not merely a front office salesperson. In addition to running a major business, she was actively engaged in the design and finishing process of the pianos bearing her name. She counted musicians and composers among her close personal friends, and her innovations with regards to the internal workings of the piano soundly advanced the technical and expressive qualities of the instrument. She provided at least one fortepiano to Ludwig van Beethoven during his early years. The composer was mightily impressed and wrote “the instrument is too good for me, because it robs me of the freedom to produce my own tone.”

Nannette was born in Augsburg in 1769, daughter of the famous piano and organ builder Johann Andreas Stein. She was a musical prodigy, and also took a keen interest in her fathers work from an early age. By age 10, she was busy in her father’s workshop physically producing various piano parts, charged with regulating keyboards and actions and also involved in the process of final voicing. It was common knowledge that no piano left the Stein shop without Nannette providing the final touches, which earned her the moniker “Stein’s marvelously mechanical daughter.” When her father passed away in 1792, Nannette aged twenty-three, took over the business with her sixteen-year old brother André. Besides learning the tricks of the piano building trade, Nannette was also a gifted pianist. She started public performances in her father’s showroom at age five, and Wolfgang Amadeus Mozart saw her perform at age eight. His description of her playing is devastating of the young lady, but Mozart generally reserved such scorn for individuals that had the potential to threaten his own supposed keyboard superiority. “Anyone who sees and hears her play and can keep from laughing, must, like her father, be made of stone. For instead of sitting in the middle of the clavier, she sits right up opposite the treble, as it gives her more chance of flopping about and making grimaces. She rolls her eyes and smirks. When a passage is repeated, she plays it more slowly the second time. If it has to be played a third time, then she plays it even more slowly.” Nannette’s true prowess as a pianist is probably best gauged by the1829 entry the English publisher Vincent Novello made in his diary. “Haydn much admired the pianoforte playing of Madame Streicher; she is still an excellent performer in her mid-sixties.” 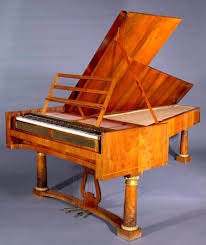 After Nannette married Andreas Streicher, a seasoned piano teacher, composer and performer in 1794, they moved the business to Vienna. It took them a while to secure permission to produce musical instruments, but once established, they quickly stood at the forefront of piano development. Andreas managed the business side, and Nannette tirelessly worked in the workshop to improve the instrument, while at the same time taking care of her two children. Like all piano firms, the Streicher’s maintained a showroom seating 300 guests that became an important musical and social center, and regular afternoon and evening concerts were attended by Beethoven and various luminaries and visitors. In fact, for a time, Beethoven preferred Streicher pianos to all other musical instruments, because “they corresponded to a high degree with his play and sound ideal.” In the meantime, Nannette was instrumental in initiating a radical redesign of the piano. Instead of having the hammer strike the strings from below, she invented a unique down-striking action that cleverly took advantage of gravity. The instrument was incredibly expensive to produce, and became the top model in their piano line; regrettably it did not take the musical world by storm. However, when Johannes Brahms moved to Vienna in the early 1860’s he chose a Streicher piano for his private and personal use. I tell you more about that story next time.