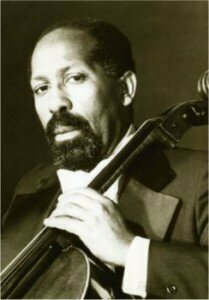 Although African-Americans have excelled in jazz, gospel, R & B, hip-hop and other genres of music, the many influential artists, composers, and performers of classical music in the twentieth century are relatively unknown. They include the cellist Kermit Moore who distinguished himself as a teacher, composer, conductor, and soloist.

He was born in Akron, Ohio in 1929, was already studying piano with his mother at age five, and at age ten, Kermit began to study the cello. A job as an usher at the Armory of Akron, a large concert hall, changed his life. When the Boston Symphony performed there, the sensuous sound of the orchestra under Koussevitzky seemed magical to the fourteen-year-old. Although he had heard the Cleveland Orchestra with George Szell, this concert mesmerized Moore and he vowed to try to reproduce the shimmering sounds on his cello.

Moore began to study at the Cleveland Institute of Music when he was in high school, and
in 1947, when he was eighteen, Kermit Moore received a scholarship to attend Tanglewood— the summer home of the Boston Symphony. He was able to study there with Gregor Piatigorsky, and William Primrose, as well as lead the student orchestra’s cello section under Koussevitzky himself. That year he was accepted at the Juilliard school, to study with the outstanding pedagogue and cellist Felix Salmond—the teacher of Leonard Rose and Samuel Mayes. Moore was his only black pupil. 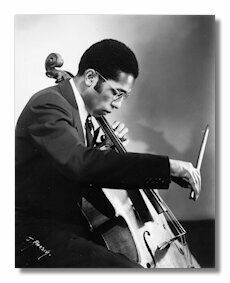 It didn’t take long for Moore to make his recital debut in New York’s Town Hall. Salmond loaned Moore his valuable Italian Matteo Goffriller cello for the occasion, and the concert was so impressive. Peter G. Davis, critic of The New York Times, wrote: “Mr. Moore vaulted every technical hurdle of his formidable recital with disarming ease, and he instinctively found a precise stylistic voice for each composer. He is a virtuoso cellist, a sensitive musician and something of a hero.”

Karl Weigl: Cello Sonata, Moore, cello and Woitach, piano
In the meantime, Piatigorsky became an advocate. Moore urgently needed a good cello. After a letter was published in the Cleveland Plain Dealer indicating Piatigorsky’s involvement, a Tononi cello was found for Moore. In 1948, six-thousand dollars was a lot of money. Moore’s father was flabbergasted since Kermit’s previous cello had only cost $500, but the investment paid off.

While Moore studied cello at Juilliard, he concurrently studied composition and musicology at New York University, where he earned his master’s degree. By the time he was 20 years old, in 1949, Kermit became principal cello of the Hartford Symphony Orchestra—one of only a few African Americans in a U.S. orchestra, especially in those days. He began his teaching career at the University of Hartford, Connecticut.

Moore decided to further his studies and went abroad. He worked with Paul Bazelaire, (who had been the teacher of Pierre Fournier) at the Paris Conservatoire, and in 1963, he and his wife Dorothy studied with the renowned teacher Nadia Boulanger at the American Conservatory at Fontainebleau. They were in good company. A number of the leading composers and musicians of the 20th century worked with Boulanger including—Aaron Copland, Virgil Thomson, Elliot Carter, and Leonard Bernstein; African-American composers Robert George Walker, Quincy Jones, Julia Perry, as well as Astor Piazzolla, Phillip Glass, and Daniel Barenboim.

Kermit Moore performed as soloist with some of the leading orchestras in the world including the Orchestre de la Suisse Romande, the Concertgebouw, and the National Radio Symphony of France, and he had a remarkable career as a conductor. In an interview with Victor Koshkin-Youritzin, in Classical Net, Moore indicated how indebted he was to both Koussevitzky and Herbert von Karajan for his own conducting proficiency. Koussevitzky would tell him, “nothing is more important than the upbeat.” Later, in a master class in Milan, Karajan reinforced this idea, shouting, “You’re not singing. You must be singing long before you give your upbeat.” Moore said both maestros’ success was due to anticipating the opening of a piece, with a clear preparatory beat, and to follow with a decisive gesture. “I have played under Stokowski, Szell, Bernstein, and a lot of other people—Franz André in Belgium, and von Knappertsbusch… So many works require a very clear, cogent downbeat, and Koussevitzky had that better than anybody I’ve ever seen.” 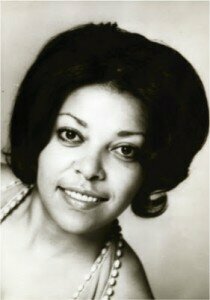 From the above-mentioned interview, I learned Kermit Moore had a simple yet important goal—“Make the most beautiful possible sound. Don’t make ugly sounds unless the composer asks for them.” He urged his students not to press, squeeze, or choke their instrument. “You can’t sing if you’re pressing. It becomes a hard, unyielding sound.”

Kermit Moore and his wife Dorothy Rudd Moore were founding members of the Society of Black Composers, and the Symphony of the New World (1964-1976). They championed African-American artists, featuring both composers and performers. Kermit also led a chamber orchestra—the Classical Heritage Ensemble. Several composers wrote for him including Margaret Bonds who was the first black soloist to appear with the Chicago Symphony, in 1933.

Moore was a prolific composer himself, of works for cello, for chamber music, for film, and he collaborated with musicians of many genres. Moore’s music can be heard in the 1984 film Solomon Northup’s Odyssey—the same protagonist as the recent movie 12 Years a Slave. His compositions include a flute sonata, Music for Cello and Piano, a concerto 2006, De Natura Naturae – for ten instruments, five woodwinds and five strings, a Timpani Concerto, Music of Nature and the Gods for clarinet, cello and piano, and Tetelestai for baritone, clarinet, cello and piano. His Music for Viola, Piano and Percussion, was performed and recorded by Emanuel Vardi, and premiered in New York’s Alice Tully Hall in 1983.

Moore also commissioned his wife to write for him. Premiered in Richmond, Virginia, during one of Moore’s cello recitals, From the Dark Tower—a song-cycle with librettos by African-American poets, for mezzo-soprano, cello and piano, was also performed with the Symphony of the New World, at Avery Fisher Hall, and with the Birmingham, Alabama Symphony.

Moore was a faculty member of the Chamber Music Conference and Composers’ Forum of the East in Bennington, Vermont for 21 years. He died in 2013 at the age of 84. The interview with Moore below shows a man full of passion for music.

An Interview with Kermit Moore
By Victor Koshkin-Youritzin