The lockdown and isolation caused by COVID have proved to be inspirational to musicians. We’ve all seen zoom concerts, zoom recitals, and even a Zoom Opera (Michael Ching’s Zoom Speed Dating). British violinist Maya Magub, living in Los Angeles, has a dual career in classical and pop music, as well as being a busy chamber player. As a session player in Los Angeles, she was helped by the music studios (who still needed to record music for films) when they assisted in setting up home studios for musicians. The musicians recorded full movie scores from isolation and, at the same time, became proficient in the skills needed for basic music engineering – playback was now in the musicians’ hands!

With this in mind, Ms. Magub took up a genre that had been of interest – that of musical canons. With the new technology, the canonic players didn’t have to be in the same location, and with the ability to do playback, each voice could perfect itself. The recording process was slower, as files travelled the world to have each voice added. Ms. Magub said the process became truly creative, with performers having more time to consider the music and recording process. She recalls emails about adding ‘alternating trills’ at a cadence point and discussions on tempo preferences. There was time, finally, to really listen to each player’s performance and consider how one’s own voice would fit in. In the end, 5 musicians from Europe and America came together (figuratively) to make this recording. 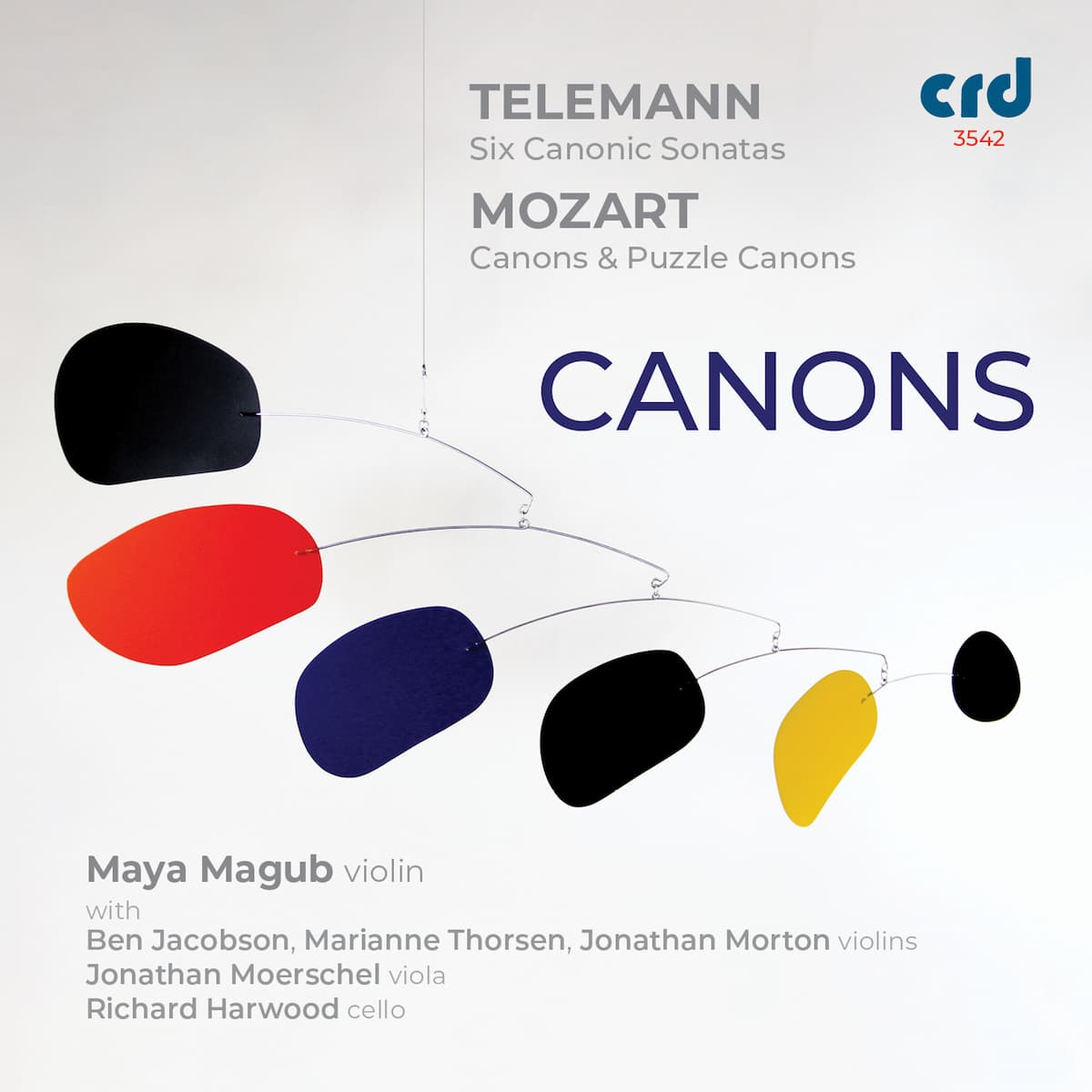 The delicate part of the recording process turned out to revolve around the placement of microphones. Since everyone was playing in different spaces with very different acoustics, it soon turned out that close mic placement (to negate the differing acoustics) was optimal. An added benefit was that the recordings sounded much more ‘live’ than they would have otherwise, and, in recording the unending puzzle canons, simply walking away from the mic made the fade-out work.

Then, thanks to audio engineering, the fact that each voice was truly recorded separately made it possible to mix the final recording in Dolby Atmos, a new special audio technology to give an immersive sound experience – you hear this in all recent movies, and now it’s being used for your audio files. The different voices now can come at the listener from different directions and for these canons, proved to be a wonderful way to create the best listening experience for the audience. 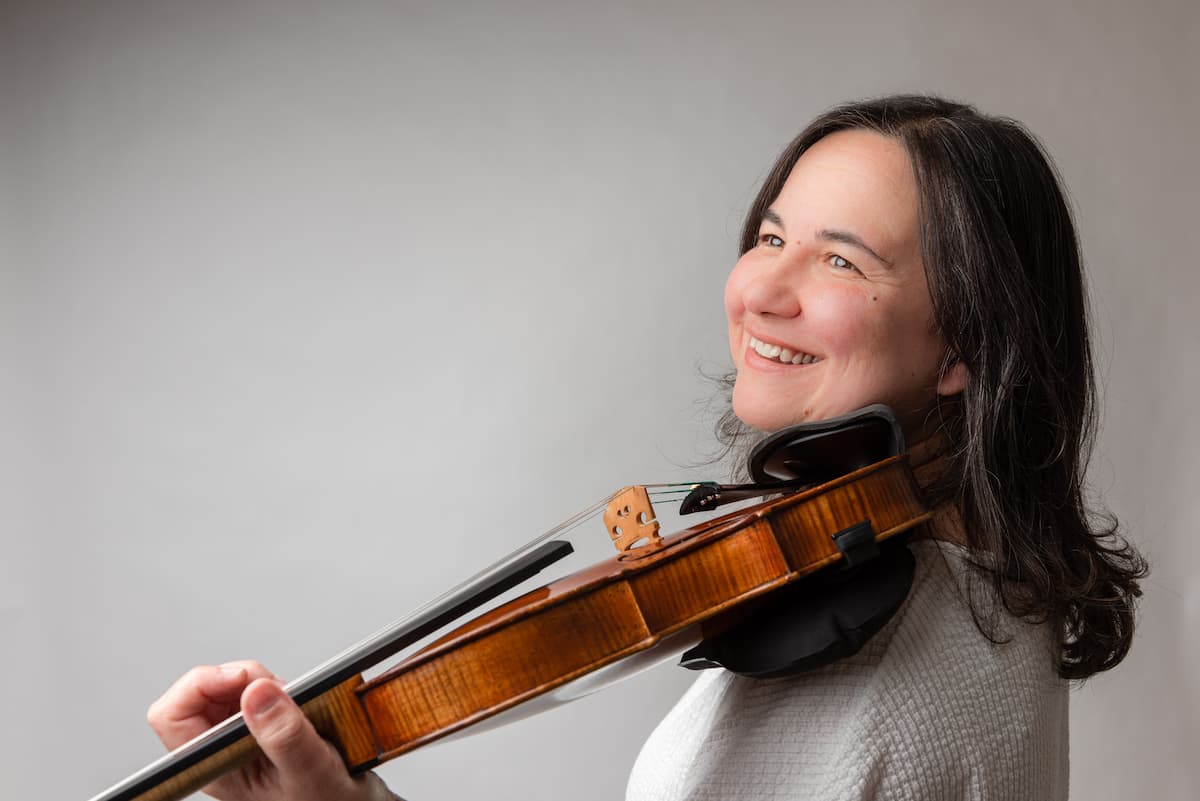 The recordings start with recordings of Telemann’s Six Canonic Sonatas for 2 violins. Each sonata has 3 movements, each movement has an exact canon (violin 2 follows violin 1 with exactly the same music at a delay). Ms. Magub plays 1-2 with Ben Jacobson in San Diego, with one or the other playing violin 1. Sonatas 3 and 4 are played with Marianne Thorsen in Norway, Ms. Thorson taking the first part in Sonata No. 4. Sonatas 5 and 6 are played with Jonathan Morton in Scotland, with him playing first in No. 6.

The second half of the recording is canons by Mozart. Mozart loved riddles and canons appealed to his sense of fun. They are very short and rarely performed – canons are very static, since they don’t go anywhere but cycle around the same key (Telemann was remarkable for his ability to move between major and minor keys in his canons).

Ms. Magub said that, despite jettisoning the texts, knowing how the texts were set informed their choices for articulation, showing where unwritten (but pronounced) stresses occurred. She found the writing to be ‘fundamentally vocal’ and that translated well into stringed performance.

For the two-, three-, multi-part, and puzzle canons, we get out of works for violin alone and have lower voices added, viola, played by Jonathan Moerschel (US) and cello, played by Richard Harwood (UK).

Mozart also wrote 4 ‘puzzle canons’, so called because he only wrote the melody and didn’t tell the player where the other voice should start or even at what pitch it should start. Mozart wrote these in 1770 or 1772 when he was in Bologna.

These are beautiful works and the ability to hear each voice so clearly is a benefit to the listener. To hear Telemann so clearly, too, and to appreciate the skill that Handel admired: the ‘effortless ability to think simultaneously in both horizontal melody and vertical counterpoint’. One of the problems that the separated ensembles had to work out was the matter of giving each voice time: it would be easy to play metronomically, but if the other voice hadn’t finished their line, then your new entrance wouldn’t work. The music, and the performers, had to have the space to breathe.

Maya Magub’s Canons is released by CRD Records on 7 October 2022.