Tell us a bit about yourself, Ariana.

I was born in Hamilton, NZ. My mum is musical, a singer and an amazing singing teacher. Dad used to play the diatonic accordion, where each button produces two notes, one when pressing the bellows in, another when pulling them out. I remember my first piano book; it was red, and the notes had the letters in them. My first teacher was a Sister (Nun) in Rotorua. There were tears. So, when she didn’t hold a place for me after our family went to Switzerland in 1987 (my dad’s first trip home since he had left in 1972), I wasn’t sad. I remember a student concert with my next teacher Gloria Taylor; the nerves were huge, the tears moderate, and the hug from mum afterwards—comforting. 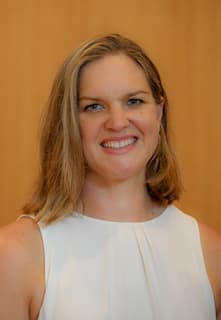 Why the harpsichord, Ariana? Why not the flute or violin?

I didn’t pick the harpsichord; it picked me. I auditioned for piano at Waikato University, the piano class was full, and they offered me a spot in the harpsichord class. I didn’t know what a harpsichord was and figured why not. When the year started, there actually was a spot in the piano class, but I stayed with harpsichord class, which turned out to be, just me. The instrument I started on was lime green, and the lid had a rugby field in the bottom right-hand corner. I also played the saxophone while at high school, and in true fashion, it wasn’t just the Alto but also the Baritone sax. It just fitted in the car. I dabble with Dad’s accordion when I go home sometimes.

I’ve tried to stop playing, but it keeps coming back. When I was living in Edinburgh, I stumbled on the Russell Collection of Early Music, housed in St Cecilia’s Hall. It holds a preserved example of a French harpsichord built by Pascal Taskin, Paris 1769 (the green one I started on, was a copy of the Taskin). I got to play this instrument, along with original Italian harpsichords and virginals from the sixteenth-and-seventeenth centuries, plus four harpsichords by members of the Ruckers family who were harpsichord and virginal makers in Antwerp in the seventeenth century.

Did you get to make music when overseas? 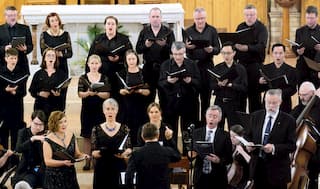 In London, I found the Early Music Shop (down the road from Long Tall Sally – a shop for tall ladies, like me), and there was a note pinned on a noticeboard, “Recorder player seeks harpsichordist”. The recorder player and I hit it off and did some concerts around London. We used to rehearse in Handel House, the home of not just George Frideric Handel, but Jimi Hendrix too. Every time I move, I wish I had played something more portable. I once watched a removalist lift my instrument over a balcony while holding a can of energy drink in one hand and a rope in the other.

My Aunty Anna, (Tante Anna) told me a story about when she was young and worked at a hotel in Weggis, Switzerland, during the Second World War. She remembered serving a group of men who used to drink a lot, mainly schnapps. One had particularly large hands, it was Rachmaninoff. And that’s funny because I especially like the romantic music of Sibelius and Rachmaninoff, particularly his concertos.

I’ve also played one of the oldest harpsichords in the world. It was in Neuchâtel, in Switzerland, an Italian instrument from 16th century, Naples.

Can you compare the harpsichord and the piano for their expressive qualities? 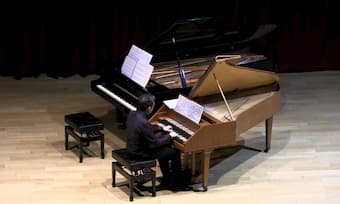 Generally, the harpsichord is introduced to a student after some years of initial study of the modern piano – much like a student transfers from the recorder to clarinet or flute. However, I feel they are independent instruments with their own unique qualities – I class myself a harpsichordist, not a pianist. The harpsichord has its own sonic palette: the ability to play one or two manuals (if your instrument is double manual), the variances in the buff stop, the need to be so precise, as mistakes can’t be hidden within the pedals of the piano.

The harpsichord is more delicate, in appearance as in sound produced. Aesthetically, it can be a work of art, with different colours schemes, and decorations. And then there’s the discussion around temperaments and all the different tunings that are available to an early music musician – with the harpsichord, you often can spend 30 minutes tuning your instrument before you even get to open your sheet music.

What is your favourite repertoire?

It’s the early French repertoire that I love most – Rameau, the Couperin‘s and Antoine Forqueray (1671-1745). I’m a sucker for some big symphonies though – Sibelius is a favourite, and I do wish I played an orchestral instrument so I could perform these symphonies and get a first-hand experience of these large-scale works. 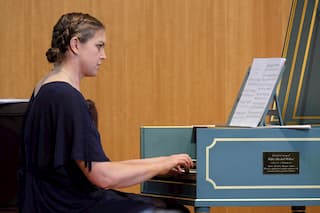 What is in the future for you?

2021 is shaping up to be exciting. I’m going to be doing the Gamba sonatas by Bach, and, with an amazing accordion player. My instrument arrived from New Zealand during Covid19, so there’s the opportunity to investigate Bach’s double harpsichord concerto as well, or even the one for three harpsichords, which will be performed at the Wesley Music Centre in Canberra. Just playing beautiful music with talented people is always an amazing experience.

What do you do when you are not at the keyboard?

Riding my road bike, I just love it. I love the sense of freedom it offers while getting some good exercise and enjoying the sites of Canberra where I am based now.

I teach piano at a private school, the Bellchambers Music School. I’ve been there for four years; I adore it. I have several students who are little gems. One child draws me an angel every week. Students sometimes trip up with my Kiwi accent though. Once I asked a child to play with her left hand and she lifted her hand off the piano. I get to spend hours each week with many awesome young musicians – who else has this opportunity, other than their parents? It’s a privilege.