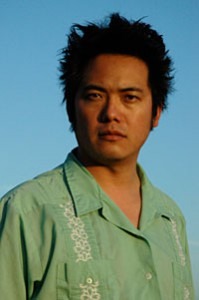 The Modern Academy, an innovative and intensive short course in music performance and composition, kicked off June 10th in Hong Kong, drawing a talented cohort of local and international students and young professionals.

Among the distinguished mentors joining the two-week sonic experience, Ken Ueno, a composer/vocalist who teaches at the University of California, Berkeley, stands out for his surprising journey to a life in music.

For university, the Japanese-American enrolled at the U.S. Military Academy at West Point, his ambitions for a career in politics as removed from classical music training as one could imagine. But a training accident resulted in his honorable discharge and he spent two years at home to convalesce. During this time Ueno discovered Jimi Hendrix, electric guitar, and later Bartok’s Fourth String Quartet.

A fire had been kindled. He believed he had to start composing, formally studying music and earning a Ph.D. from Harvard. “Composing has since been the mechanism through which I have sought, wrought, and augmented my sense of an autonomous self,” Ueno explains. “It is empowering like nothing else to conceive of a ridiculous thing and have it done, especially when other people get it too.”

It should therefore come as no surprise that his unexpected path into music translates into a desire to help aspiring composers and performance artists realise their visions. Ueno has taught at summer festivals before and always thrills to the collaborative learning process. “It’s inspiring to me and reinvigorating – that’s the most important takeaway that I’ll be looking forward to,” he says.

For Modern Academy, Ueno and his fellow tutors will conduct master classes and practice sessions, first at Spring Workshop, a sleek and airy gallery space inside an industrial building in Hong Kong’s reviving Wong Chuk Hang area, then at the Hong Kong Academy for Performing Arts. The course includes concert performances that are open to the public.

The composition program comprises three tracks: one devoted to dance and composition, another for film and composition, and the third, which Ueno is taking up, exclusively on composition. In his view, “certain sounds have intrinsic communicative power that they can deliver,” and he will no doubt share this approach this summer. In so doing, Ueno extends a tradition of exploring truth through creative enterprise, a practice dating to the most pre-eminent classical composers.

Appropriate to this spirit of experimentation, The Modern Academy brings a special focus to the works of two giants of 20th century composition: Edgard Varèse, for whom 2015 marks the 50th anniversary of his death, and Luciano Berio, in the 90th anniversary year of his birth.

Ueno offers unalloyed praise for the two featured composers. “Edgard Varèse is one of the greatest composers of the 20th century,” he says. “He led the way towards music that was not hierarchically based on Western harmony alone.” Of Luciano Berio, Ueno enthuses about the Italian pioneer’s masterful experimentation in “maximizing the potential of every instrument” and summoning “utter musicality”.

With a strong appreciation of the rich tradition that precedes him as well as a desire to chart unprecedented paths in music, Ueno is a rare contemporary composer who can bridge classical and new music and nurture works that ring true.