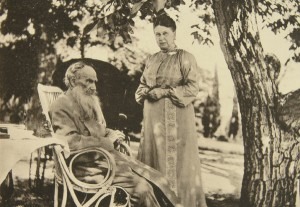 Sergei Ivanovich Taneyev (1856-1915) was a rather unusual character! Well into adulthood, he lived with his beloved nanny Pelageya Vassilievna Ivanovna. He abhorred alcohol and was a militant non-smoker; making his friends smoke at the open kitchen window in clear view of a warning he had posted about the dangers of the habit. He did enjoy the company of some of his young male students whom he would invite to his country dacha at the weekend for some vigorous outdoor activities. He also seemed to be rather ecstatic about bicycling, as he once explained, “I think that even the experiences of newlyweds on their wedding night cannot compare with the sensations experienced by a bicyclist.” At any rate, Taneyev was rather nervous around women. As a former student later explained, “he simultaneously experienced fear, respect and contempt towards ladies, their appearance at his home invariably throwing him off kilter and making him less straightforward and natural.” So it seems that apart from playing piano and chess, and riding his bicycle, Taneyev was rather indifferent to the temptations of the flesh.

During the summers of 1895 and 1896, the 39year-old Taneyev stayed at “Yasnaya Polyana,” the country estate of the Russian novelist, essayist, playwright, philosopher and social critic Leo Tolstoy and his wife Sophia Andreevna Behrs, who was called Sonya by her family and friends. Taneyev had been a casual family acquaintance, and sometimes went ice-skating with Tolstoy. The Tolstoy’s were just recovering from the death of their youngest son Ivan, and Taneyev arrived to spend a month, accompanied by his nanny and his seventeen-year-old composition student Yury Pomerantsev. Taneyev would compose and practice the piano every day, and unwittingly he became an emotional crutch for Sonya while she mourned the loss of her child. In fact, she developed a rather obsessive attachment to the composer, which greatly embarrassed her children. Taneyev, however, was completely absorbed in his music, and he merely provided a sympathetic ear to Sonya. Sonya’s tenderness toward the eccentric composer was probably more maternal than anything else. He simply had a calming effect on her, and his music gave her the illusion of an emotional harbor from the stormy atmosphere created by her husband.

Sophia was only 18 when Leo proposed to her. Over the next 25 years, she gave birth to 13 children, and their relationship is best described in quotes from their own diary entries. He wrote, “Nobody will ever understand me,” and she said, “He has never taken the trouble to understand me, and does not know me in the least.” Worn down emotionally and physically by their demanding lives and by each other, the Tolstoy’s tormented each other for 48 years with their love and with their hate. When Taneyev initially appeared on the scene, Tolstoy did not mind and they played a lot of chess together. But as time went by, Tolstoy developed deep feelings of jealousy towards the composer. In his diary he compared the shy and effeminate composer to a rooster, and completely ignored the fact that Taneyev was an asexual virgin and the affair purely platonic. Tolstoy nevertheless found the situation intolerable, he could not sleep and incessantly argued with is wife. Sonya fought back aggressively, maintaining that she “would love people who are good and kind.” Tolstoy repeatedly contemplated to leave his wife, and he wrote a number of farewell letters to Sonya, but in the end he always came back home. This emotional rollercoaster went on for years, while the unsuspecting Taneyev calmly continued visiting the Tolstoy house with Sonya attending his concerts in Moscow. It was only in 1904 that Taneyev ended the imaginary relationship, with Leo “leaving this worldly life in order to live out his last few days in peace and solitude” soon thereafter.