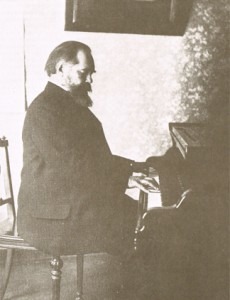 Beside various occasional pieces for violin and piano and several scores for strings along, Taneyev’s chamber music catalogue contains three large-scale works with piano. All three dates from the late stages of his career and almost excessively focus on musical architecture. The Piano Quintet Op. 30 dates from 1910/11 and seems to have inspired his essay Thoughts on my own creative work. Taneyev writes, “It often happens that a musical idea buzzing in my mind will attract my special attention. At this stage it is already obvious that it will form the main idea of the work… A long time later, sometimes even a matter of years, the idea may recur. In most of my work, the movements are linked together with common thematic material, so that they mutually reflect each other when the work is elaborated.”

Sergei Ivanovich Taneyev: Piano Quintet Op. 30
Russian music during the late 19th century was divided into two competing groups. The academically trained cosmopolitan composers, also known as the “Westerners” were led by Tchaikovsky and Taneyev. The five patriotic-minded and self-taught “Populists” meanwhile, became more commonly known as “The Mighty Handful.” Despite their obvious differences, they had one important thing in common; their love of Russian folk song. For both camps, the Russian song held great significance for the national musical idiom over and above its purely musical beauty. Taneyev was a close friend of the social activist Leo Tolstoy, and he left the Moscow Conservatory in 1906 for the People’s Conservatory, where he taught free of charge. Inspired by his Russian heritage and social responsibilities, Taneyev composed roughly 50 songs, revealing a composer of lush harmonies and assured vocal lines.

Sergei Ivanovich Taneyev: 10 Romances, Op. 17, No. 10 No. 5 No. 9
The C-minor Symphony is considered the finest of Taneyev’s instrumental scores. Dedicated to Alexander Glazunov, who also conducted the premiere on 21 March 1898 in St Petersburg, the worked earned Taneyev the nickname “Russian Brahms.” The composer vehemently protested, but such a comparison is not without foundation. Sonya Tolstoy wrote in her diary, “Sergei Ivanovich played for me his wonderful symphony and it affected me very much. It is a beautiful work, in a noble and elevated style.” And Rimsky-Korsakov congratulated Taneyev with the words, “ I think that your symphony is the best contemporary work; it is noble in style, excellent in form and marvelous in the development of all musical ideas.” The first movement is a large-scale essay in counterpoint, followed by a broadly flowing “Andante.” In the “Scherzo,” Taneyev bring back the opening motif from the first movement, and the grand “Finale” takes on heroic and monumental proportions.

Sergei Ivanovich Taneyev: Symphony No. 4, Op. 12
The Canzona in F minor is one of Taneyev’s few concerted works. It is both virtuosic and lyrically expressive, and ever since its publication in 1883 has been extremely popular in Russia. In fact, its popularity prompted Taneyev to arrange the work for clarinet and piano, and for cello and piano, respectively. This short work is peaceful, measured and in its middle section highly reminiscent of the clarinet works of Weber. Yet, as a student work, it never loses sight of Tchaikovsky’s melodic expressiveness. Although short and relatively simple, the Canzona already demonstrates Taneyev’s musical sophistication in its careful layering of voices and thematic ideas.