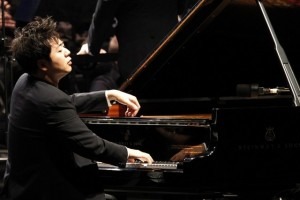 In the dimmed lights of the concert hall the pianist crouches, cat-like, over the piano. His hands swoop across the keyboard in a blur of movement, he sways maniacally from side to side before throwing back his head and raising his eyes to heaven. At the closing cadence of the piece, he flings his arms dramatically away from the keyboard in a classic virtuoso flourish.

We have all witnessed exaggerated gestures such as these at a concert or two, and now and then we have also wondered what is the point of such pianistic gesticulation.

The concert hall is like the theatre, and the performer the actor on the stage. And for us the audience, a concert is both a visual and aural experience – we listen with eyes as well as ears. Those who attended concerts given by Liszt or Paganini wrote of their performances as an extraordinary experience amplified by the fact that the spectators were able to see the virtuosity in action.

The physical movements and gestures of the performer not only influence the character and quality of sound but also enhance the dramatic content of the work and tell the ‘story’ of the music to the listener. Music is emotional and expressive – even then most mannered passages of Bach are rich in expression – and the performer’s physical gestures communicate the expressive content of the music being played. Sometimes, these gestures can seem extreme, and when the performer’s gestures get in the way of the music or have no connection to the ‘story’ in the music, it can be frustrating or impossible to watch. But at other times, with the right gestures, the performance is magically enhanced and heightened, for both listener and performer.

Gesture is crucial in piano playing as our movements at the keyboard are immediately translated into sound: smooth, flowing movements will result in a smooth, flowing sound, while prodding or poking at the keys will result in an ugly sound. Gesture should always serve the music – not only in terms of the sound being produced but also in guiding the audience through the narrative of the music. At the end a performer may fling their hands away from the keyboard and the audience will know that the performance has ended and will take that as the cue to applaud. Or a performer may choose to allow their hands to remain on the keyboard, withdrawing them slowly to allow the memory of the sounds to continue to resonate with the listeners. The audience reads these gestures and will (hopefully) know not to applaud immediately.

We know that a light, springy movement in the hand and forearm is required to produce staccato: imagine that the keys are very hot, too hot to touch, and now try playing staccato. The effect will be light, crisp and colourful. And to anyone watching you play, those crisp, light movements of your hand and arm will immediately enhance their listening experience. In the same way, a very connected, fluid and smooth movement can produce the most beautiful singing legato. For a chord marked with both an accent and sforzando, try ‘throwing a dart’ at the keyboard: a sharp flick into the keys, and you will create a bright, dramatic sound. For an effective ‘drop slur’, allow the wrist to literally drop below the level of the keyboard for the first note of the slur and then float away from the key for the second note. This will create the perfect ‘down, up’ gesture of a slur, with almost no finger effort. To bring elegance to a phrase, allow the wrist to carry the weight of the hand away from the keyboard to soften the last note of the phrase. To help create flow, forward motion and narrative within a phrase, try ‘conducting’ yourself as you play – either with a free hand or via an ‘internal conductor’ within – or imagine how a string player might shape that phrase. All these gestures can support and enhance your technique while also providing important ‘musical signposts’ to the listener.


I was at a piano course some years ago where another student played a Barcarolle by Alkan. She was having trouble creating a smooth rocking movement in the semiquaver figures and the teacher suggested she might try swaying gently from side to side as she played. The difference in the sound was wonderful: suddenly the music was alive with images of a boat gently bobbing on the waves and the pianist’s gestures undoubtedly contributed to the ‘story-telling’ in the music. When I perform Takemitsu’s Rain Tree Sketch II, one of my favourite pieces, I try to create a sense of repose and stillness by keeping my physical gestures to a minimum to convey the meaning of the music (a meditation on the flow of life).

As we develop and mature as pianists, our gestures become more refined, natural and instinctive. We learn how to use gesture to inform and enhance our playing to the point where we can feel we are ‘in character’ for each piece before we even make a sound.