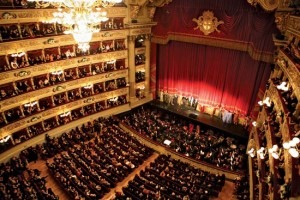 Inaugurated in 1778 La Scala was the heart of musical Milano for the last 200 years. A number of assoluta premiere of Rossini, Verdi, Donizzetti, Bellini, Puccini took place here.

La Scala was built with Milanese money in 1777 when 90 wealthy Milanese family got together and had to ask the reigning Austrian Archiduke permission to rebuild the fire damaged Teatro Regio Ducale. 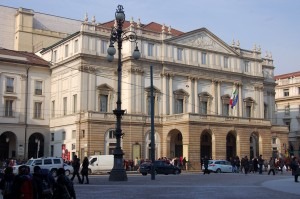 The platea (parterre) had no chairs the spectators standing, less fortunate than the box owners (sold to privates) Above the boxes is the loggione where the moneyless but vociferous music afficionados sit waiting to give thumbs up and down for the musical performance like in the good old time of gladiators in the Colosseo located only 2 miles away.

La Scala has a checkered war history; It was bombarded by allied forces, now the allied American and English are among the biggest patrons of La Scala.

Great conductors have left their mark here; Richard Strauss, Karajan, Sabata, and more recently the famous duo of Strehler-Muti have given new and glamorous life to La Scala.

There are many Opera houses paying better, giving longer contracts, better conditions, but singing at La Scala is the nec plus ultra, the Everest of bel canto.

If you have sung at La Scala your children and grandchildren will always be proud of you, no matter what you did before or what you will do thereafter.

La Scala is glorious tonight: all lights on, full house for this «Nozze» (always full tells me my taxi driver) Parterre; not a single empty seat. All 6 balconies replete. The public ranges from 40’s to 70′-80’s. Many white heads, long dresses, smoking, papillons mixed with open shirts. Mostly Italian though a brief search reveals a couple from Lithuania, my seat neighbor is from Genova, a little further away a couple from Napoli and then one couple from Shanghai, who was set back by my approach. 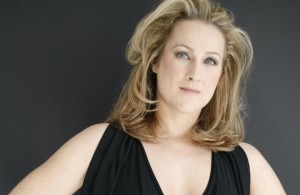 «I’m a Journalist» The man eyes me anxiously-suspiciously, answers hesitantly.

The Chinese are not in forza they will not buy la Scala any time soon (meantime buying Milan and Inter, soccer team will do).

The libretto is by da Ponte, great friend and genial drinking buddy of Mozart, after the Beaumarchais piece translated of course from French.

Interestingly because of its revolutionary leanings the opera was cancelled the very night of its premiere in 1785 by no less than the emperor of Austria.

Its premiere took place in Paris in 1784 and returned with great success to Vienna in May, 1786. So for the last 230 years Le nozze has been sung in every major opera house on four continents.

Alas for a one page missing copyright Mozart would not have finished at the common graveyard in Vienna for lack of funeral funds of the family.

But low and behold Suzanna confesses that she is being pursued by the count; non passeran vows Figaro.

Act 2 Figaro and Suzanna get the countess’ consent to trick the count into meeting Suzanna’s surrogate; Cherubino, a page disguised as Suzanna.

The plot fails and in Act 3 we have the gathering of Figaro’s parents who vow to remarry at the same time as Figaro and Suzanna. 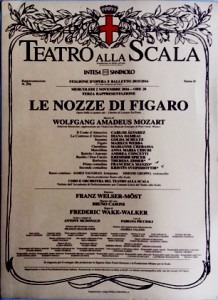 The count tries in vain to seduce Suzanna who is now disguised as his wife.

All ends happily; the count is forgiven his adulterous attempts and all sing happily in a glorious finale.

The Scaligero public is fairly economical in his applause and I felt somewhat outcast screaming brava for the Queen of the Night; Dame Diana Damrau.

Tonight the cast is glittering; towering over is frau Damrau; la contessa, per pound of vocal weight she is at the top of the totem. A gorgeous velvety colour sostenuto in all the ranges, an impeccable fraseggio, pianissimi that makes you straighten up in your chair, and then a volume when unleashed fills up the balconies to the sixth floor.

All this in a youthful package wrapped up in a very exuberant cloth by herself worth the six hour trip from Perugia to Milano. She is well seconded by Susanne (Shultz) who has energy to spare moves swiftly with body, limbs and voice. And she has an amazing range; the high the low and the middle the vibrati are all there she is a colour gift from South Africa . A playful Cherubino and the great bass baritone of Alvarez the count complete the great cast. Only reservation for the nice baritone of Figaro which is not large enough for the huge palcoscenico of La Scala.

The supporting voices are exceptional, who knows they could take over the main cast. And there are the 3 surprises. Theresa Zisser, Francesca Manzo, Kristin Sveinsdottir all students at the Academy alla Scala the school of la Scala that nourishes and educates the future stars…What a thrill to be called to the stage at La Scala with la Damrau, sing with her in the sextet!

Returning to the performance; the choir is surprisingly restricted but effective and the costumes are imaginary and smartly they don’t detract too much attention from the singing lines.

Franz Welser Most, an international conductor has a highly polished ensemble in his hands some say the best orchestra in Italy.

A special mention for the clever lightning that has surprised… who would think that besides being expensive lights could add texture and action to opera?

Obviously the major budget allocation in the production went to top singers and the allestimento had to make do with remnants. How to explain the modest scenery consisting of poorly painted misfitting panels with little and uninteresting changes over 4 acts.

Other highlights were the singing a cappella; the quartet/quintet/octet and final ensemble a «colpo di genio» rarely matched in the history of vocal music writing.

All in all a great production in this country with crolling banks, devastated by earthquakes, unemployment of up to 40% of the young, inundated by the 130.000 unlawful immigrants, an ineffective government that can’t give work to the young and helas can’t stop the earthquake.

So La Scala is a miracle, and the EU and maybe the world should continue to treat it as such, as much a part of our cultural heritage as the Uffizi in Florence the Colisseum in Roma and the Great Canal in Venice.