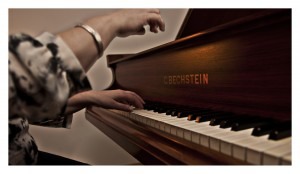 In my previous article on gesture, I talked about the physical gestures we can employ to influence and enhance the quality of our sound and how we can create certain effects at the piano, such as staccato, a rich cantabile legato, drop slurs, and brightly accented notes and chords through a variety of touches and gestures.

In this second installment, I will explore how an understanding of particular composers and styles of music can help us create aural and visual ‘illusions’ which enhance the dramatic content of the music we play and to convincingly shape and convey the myriad characters, emotions and narratives in the music for our listeners.

For example, if you enjoy playing the music of J S Bach your performance and communication of his music will be flawed if your gestures are ill-suited to this kind of music: it is not appropriate to play Bach in the style of Liszt! The ‘audible image’ of the music of Bach is well known and most of us will know that Bach’s keyboard music was originally performed on the harpsichord, organ or clavichord. When playing Bach on the piano, we need an awareness of both the instrument for which it was originally written and the wider context of Bach’s writing, in particular his choral writing based on religious subjects. Our gestures should reflect the profundity, religious seriousness, and choral or organ expressiveness with a special emphasis on the voicing and contrapuntal lines inherent in his music, an almost serene detachment and the sense that this music expresses ideas far greater than the sum of its parts.

In the music of Haydn and Mozart we might wish to employ some of the gestures associated with the harpsichord – a certain elegance, playfulness and economy of movement. In Mozart’s piano music, where I feel we experience his entire musical output in microcosm, we need to incorporate operatic arias, and orchestral and string quartet writing in our shaping and communication of the music, all without employing overly exaggerated or extreme gestures. In Beethoven the gestures become more intense, more alive. His piano music is full of orchestral writing and in conveying this to the listener, we use not only sound and texture but bigger gestures to express greater tension, the full range of human emotion, his philosophy and his struggle. It is also worth bearing in mind that the later piano music, in particular Beethoven’s last piano sonatas, was written for the new improved and much more robust hammerklavier – an instrument much closer to the modern piano.

Music from the romantic era, the music of Schubert, Chopin, Schumann and Liszt, requires even deeper contrasts. Here is music in which the composers’ most sensitive and intimate feelings combine with dramatic emotional outbursts, epic narratives and tragic cries of despair. We must learn how to express all these contrasts and emotions, in our sound and our gestures.

The impressionists – Debussy and Ravel and their contemporaries – make different demands, requiring an ability to skillfully depict many colours and nuances, subtleties of touch, transparency, and diffuse yet accurate pedaling. Keep in mind that these French masters were also inspired by the French clavecinistes (harpsichordist) of the seventeenth century: there is a Baroque precision in the writing of Debussy and Ravel.

Travel east to Russia and here is music rooted in the vastness of the landscape, the mysteries of its folk music and the famous Russian ‘soul’, while also absorbing the best traditions of Western music. The art and craft of piano playing is taken to a new level in the music of Rachmaninoff, requiring not only highly-advanced technical facility but also emotional depth and richness of sound and touch. Our gestures should be broad and powerful, full of energy and life, free and strong.

Understanding the context of the music we play, exploring other works by the same composer or period, listening and attending concerts will help us develop a deeper knowledge of the dramatic content encoded in each piece we play. We can never fully decipher the composer’s intentions, and at this point that elusive concept ‘interpretation’ comes into play, allowing us to shape the music in a distinct and personal way.