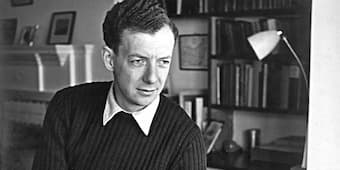 Britten’s Spring Symphony, completed in 1949, is a unique song-symphony. Not with just one movement set to words, as in Beethoven’s Ninth, but with English texts throughout. Most of the sources are from the 16th and 17th century, but a few more modern texts, such as by William Blake and W.H. Auden, slip in.

The 12 texts of the symphony are divided into 4 parts, just as the movements of a symphony. Part I, poems 1-5, start us out in Winter, with the sun being asked to make the winter night into spring. On a text by George Chapman (1559?-1634). The Cuckoo, the harbinger of spring comes next, with accompanying trumpet fanfare, on a text by Edmund Spenser (1552-1599).


This song illustrates some of the demands of this symphony where the contained orchestral sound is disturbed by solos from different sections of the orchestra, the skills required of the soloists, etc. The work as a whole is written for a large orchestra, 3 vocal soloists, a children’s choir, and a full chorus. Even the children’s choir is given challenging music to sing.

Part II heralds the coming of the first spring flowers, violets, here called by their old name ‘maids-of-honour,’ from a poem by Robert Herrick (1591-1674). Henry Vaughan (1622-1695) welcomes the spring rains. Out on the lawn I lie in bed, to a text by W.H. Auden (1907-1973), shows us how to enjoy the ‘windless nights of June’ watching the stars overhead. Written in 1933, it forecasts a social revolution. Although Auden saw harmony in the future, we now read his lyrics in the shadow of WWII.


Part III begins dramatically with ‘When will my May come,’ a restless poem by Richard Barnfield (1574-1627) with an equally restless setting. The poet is looking for his love, his beauty, but can only languish, waiting.

The final song, and the final movement, sets a text by Francis Beaumont (1584-1616) and John Fletcher (1579-1625) from their play The Knight of the Burning Pestle, with the wonderful first line of ‘London, to thee I do present the merry month of May.’ Everyone in the city and the country rejoices at the coming of spring. At the very end, the 13th-century spring text of ‘Sumer is icumin in’ truly brings home the changing of the seasons.


The work is not quite what one would imagine from a work entitled a Spring Symphony. With the addition of the topical texts, Britten has created something more like a cantata to spring. The orchestra, although extremely active, is still secondary to the voices. In the work, Britten manages to capture both the joy of the changing season, and problems it brings, most evident in having the cuckoo, long a symbol of infidelity, as your signal bird!