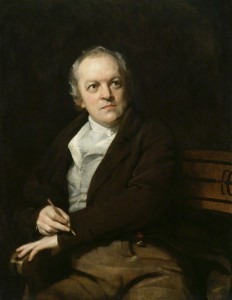 The Romantic period poet and artist William Blake (1757-1827) made more of an impression after his death than he did during his own lifetime. Whereas he was largely unrecognized when he was alive, current critics now declare him “…the greatest artists Britain ever produced.”

Religion played an important role in his work and it is his illustrations for the Biblical Book of Job that caught the interest of Ralph Vaughan Williams. Blake’s first set of illustrations for the Book of Job was a set of 19 watercolours, now held in the Morgan Library in New York, that he painted in 1805-1806. He did a second set in 1821. He started the intaglio engravings in 1823 and completed them in 1825; they were published in 1826. The intaglios are considered to be his greatest masterpieces in engraving and were a (rare) commercial and critical success.

In 1931, British composer Ralph Vaughan Williams (RVW) was inspired by Blake’s Job series of watercolors to write the music for a new ballet: Job: A Masque for Dancing. The word ‘masque’ is used because RVW hated the idea of ballet. RVW’s first version was for a concert orchestra and it later was reduced to a ballet-size orchestra by Constant Lambert. 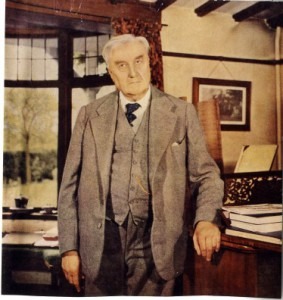 The work was choreographed by Ninette de Valois and was first performed by the Vic-Wells Ballet (later known as the Royal Ballet) at the Old Vic Theatre on 5 July 1931. The work is significant in the history of British ballet because it was the first to be produced by an entirely British team.

The Book of Job is the story of a religious man who is given by God to Satan to test his faith.

In the watercolor, Job’s Evil Dream, the 11th picture in the series, Job, asleep, is assailed from below but protected from above by God. 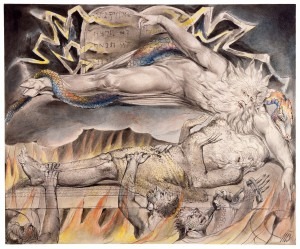 In his setting of this, RVW has focused solely on the bottom half of the painting. The scenario for the dance tells us: Job is quietly sleeping. Satan stands over Job and calls up terrifying visions of plague, pestilence, famine, battle, murder and sudden death who posture before Job. The dancers headed by Satan make a ring round Job and raise their hands three times. The vision gradually disappears.

Vaughan Williams: Job: Scene 4: Job’s Dream (BBC Symphony Orchestra; Andrew Davis, conductor)
The ballet closes with the continuing faith of Job no matter what Satan has thrown at him and the failure of Satan. He’s thrown down and the ballet closes with an epilogue where, in the scenario, “Job, an old and humbled man, sits with his wife. His friends come up one by one and give him presents. Job stands and gazes on the distant cornfields. Job’s three daughters enter and sit at his feet. He stands and blesses them. 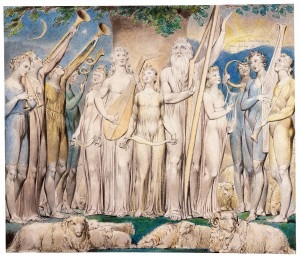 Job and His Family Restored to Prosperity

Vaughan Williams: Job: Scene 9: Epilogue (BBC Symphony Orchestra; Andrew Davis, conductor)
In his musical setting, RVW has taken Blake’s seemingly timeless watercolors and placed them in a sound world that reflects the imagery. In parts of the ballet, he uses old-fashioned dances such as the Pavane, the Galliard, and the Sarabande to carry elements of Blake’s Romantic vision into the modern age.