His early compositions were not well received, with a critic writing, “It seems as if Herr Berwald’s hunt for originality and his constant striving to impress with great effects has deliberately banished all melodiousness from his compositions.” Berwald’s reply was equally blunt, and he basically managed to alienate the entire musical establishment of Stockholm. As such he applied for a grant from the king to travel to Germany in 1822. After several unsuccessful applications, Berwald finally managed to depart for Berlin in 1829 and met with Felix Mendelssohn. However, a number of operatic projects failed to reach fruition, and as his funding dried up he decided to make a living by founding an orthopedic institute in 1835. His foray into bone setting turned out to be rather successful, and apparently, some of the orthopedic devices he invented were still in use decades after his death. Financially more stable, Berwald sold his business and moved to Vienna in 1841 to resume his compositional career and to ask for the hand of Mathilde Scherer in marriage.

A concert in Vienna in 1842 included several premiers, and The Allgemeine Theaterzeitung wrote, “his new compositions are of great interest, notably for the originality of their material, their ideas and the disposition of their elements, and also of the treatment of the forms, and the composer’s use of the manifold possibilities and the power of the orchestra.” 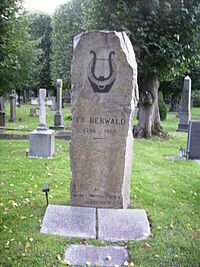 The relative success of his Viennese excursion became the catalyst for a series of four symphonies he wrote over the next three years. However, the Stockholm musical establishment flatly rejected his 1st Symphony complaining, “that the work’s most distinguishing characteristic was its incomprehensibility.” His operatic compositions fared little better, and Berwald returned to Vienna in 1846 via Paris. He unsuccessfully tried to interest the Opéra-Comique and the Conservatoire in his music, and after a dramatic tone poem written for Jenny Lind failed to gain favor with Eduard Hanslick in Vienna, Berwald returned to Stockholm. Still unable to secure a musical appointment, Berwald took up the directorship of a glassworks company in northern Sweden. He ran the business so successfully that he was subsequently employed as the managing director of a brick manufacturing business. Financially secure, he crafted a number of chamber music compositions, which he aggressively promoted abroad.

Franz Berwald: Piano Trio No. 3 in D minor
Finally gaining some recognition, Berwald finished two operatic projects and was elected a fellow, and subsequently professor of composition, at the Royal Academy of Music. After less than a year on the job, Berwald contracted pneumonia and died on 3 April 1868. Almost completely forgotten, it was not until the beginning of the 20th century that Berwald’s music became a reference point for a younger generation of Swedish composers. Carl Nielsen wrote in 1911, “Neither the media, money nor power can damage or benefit good Art. It will always find some simple, decent artists who forge ahead and produce and stand up for their works. In Sweden, you have the finest example of this: Berwald.” More recently, the completion of the critical edition and several recordings of the symphonies “points towards a more positive reception of Berwald’s work in the future.”

Franz Berwald: The Queen of Golconda, (“You hate not the grief,” Act 1)