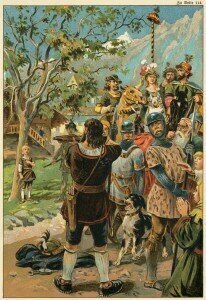 Rossini’s last opera, the four-act Guillaume Tell, with a composite French libretto based on Schiller’s play Wilhelm Tell, was produced at the Paris Opéra on 3 August 1829. However, within three performances the opera’s length of roughly four hours and difficult casting requirements necessitated some immediate cuts. In addition, the complex tale of the Swiss patriot William Tell and his famous bow and arrow during the Austrian occupation of Switzerland, raised a number of political concerns. 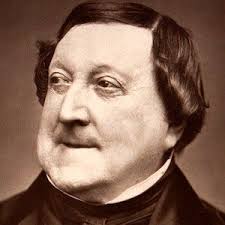 The semi-legendary figure of William Tell occupies a middle ground between documented reality and popular myth. Swiss cantons were under the direct rule of the Holy Roman Empire, and in the early 14th century, the Austrian Empire wanted direct control of trade routes and taxation. A successful rebellion by three cantons led to the formation of the Swiss Confederation, and Tell became the mythical symbol of that struggle for independence and freedom. 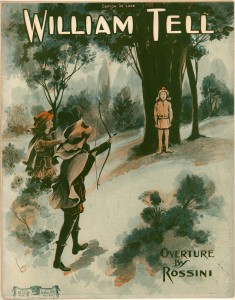 By 1831, Tell was abridged to three acts, with a new finale based partly on the concluding section of the famous overture. Further revisions produced a seemingly endless number of variants, and the four-act version was only restored at the Paris stage in 1856. When Rossini was asked about his compositional legacy, he replied, “Do you know what will survive me? The third act of Tell, the second act of Otello, and the Barber of Seville from one end to the other!” 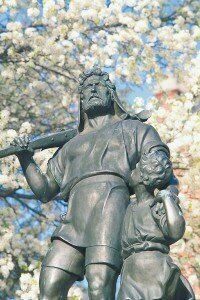 He was certainly correct about the Barber of Seville, and the “Overture” to Tell has appeared in a substantial number of popular entertainments in the 20th century. The opening colloquy for five solo cellos is a rare inspiration, evoking, Berlioz suggests, “the calm of profound solitude, and the solemn silence of nature when the elements and human passions are at rest.” It is certainly worth remembering, however, that “no composer in the first half of the nineteenth century enjoyed the measure of prestige, wealth, popular acclaim, or artistic influence that belonged to Rossini.”