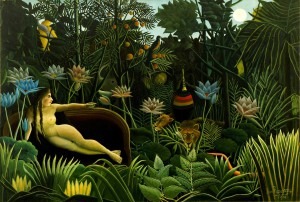 Within the context of fine arts, the term naïve is used to describe artists who work in an unsophisticated style with a child-like simplicity. Frequently such works ignore artistic conventions like the rules of perspective, and employ strong patterns and unrefined color in all planes of the composition. Above all, simplicity rather than subtlety are the supposed markers of naïve art. A number of artists did not receive formal education in art school or the academy, as for example Henri Rousseau or Alfred Wallis. The naïve painter “invents his own expressive and stylistic alphabet entirely unaided.” Bustling with refreshing innocence, charming use of bright colors, child-like perspective and idiosyncratic scale, naïve subjects portray simple and often idealized scenes of everyday life. As viewers, we are treated to an extremely personal, optimistic and coherent vision of what the world is or should be.

Naïve artists gradually emerged at the end of the 18th century and their influence was felt across the continent. Most experts agree however that naïve art was discovered in 1885. It was the year the painter Paul Signac became aware of the talents of Henri Rousseau and organized exhibitions of his work in a number of prestigious galleries. Initially, Rousseau was mocked for his clumsy compositions and awkward perspectives. As one critic put it, “his use of color is idiosyncratic and he is incapable of painting feet.” For the first two decades of his life Rousseau worked as a Parisian customs official. He took up painting at age 40 to occupy the boring hours of inactivity that were part of the job. Entirely self-taught, Rousseau never traveled yet concocted exotic landscapes and sceneries from his imagination. When I paint, he once said, “it seems to me that I am in a dream.” Rousseau did not actually have to go to exotic jungles in order to paint a true jungle; his style was all “about art and not about creating an illusion.” Around the turn of the 20th century, Rousseau was championed as an originator of modern art. “There is the truth and future! There is painting!” Gauguin exclaimed in front of his self-portrait, while Picasso bought several of Rousseau’s paintings.

Franz Berwald: Symphony No. 4, “Sinfonie Naïve”
The concept of the naïve was not exclusively tied to the pictorial arts. In fact, composers took it up as well. Radiating a feeling of contentment and lightheartedness, Franz Berwald tellingly subtitled his Symphony No. 4 “Sinfonie Naïve.” Completed in 1845, Berwald went to Paris hoping to interest the composer/conductor Daniel-François Auber into scheduling the work for performance. Berwald was not successful, and eventually dropped the moniker naïve in order to avoid any misunderstandings. For Berwald, the nickname never had pejorative implications as it musically paid tribute to simplicity and naturalness, those essential elements that would come to define naïve art. Berwald himself called the symphony, “the best work that I have written in that genre.” In the event, the work was finally premiered in 1878. Naïve Art has been described as “the celebration of a human narrative that radiates joy, serenity, peace and tranquility.” Berwald never became as famous as Rousseau, but he has certainly left us a sounding testament disclosing the origins of naïve art in music.