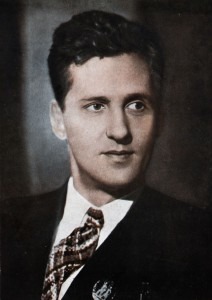 Vladimir Sofronitsky (1901-1961) was a Russian pianist who made his name not playing the classical and romantic composers but in his performances of the works of Alexander Scriabin (1872-1915), his wife’s late father.

Born in St. Petersburg, he studied at the then-Petrograd Conservatory, graduating in 1921. He gave his first solo concert in 1919 and only left the Soviet Union twice, once to do a tour of France in 1928-29 and later to do a quick appearance at the Potsdam Conference in 1945 at the special request of Stalin.

Sofronitsky met Elena Scriabina, Scriabin’s daughter in 1917, two years after the death of her father, and they were married in 1920. He never met Scriabin, but Scriabina said that her husband was the ‘most authentic interpreter’ of his works.

He’s little known in the west due to his few appearances outside the Soviet Union but he was held in high regard by other pianists such as Sviatoslav Richter and Emil Gilels. They held him in such high esteem that when he acclaimed Richter as a genius, Richter responded by calling Sofronitsky a god.

The authority with which he performs Scriabin’s Third Piano Sonata gives us a taste of how a master confronts a famously difficult composer.


He was also known for his Chopin performances and in this performance of Chopin’s Nocturne in C minor, Op. 48/ 1, he takes a deliberate tempo that brings out the melancholy in the work.