Artists Behind the scenes
Behind the Curtain
Mademoiselle La Cachucha
by Georg Predota January 29th, 2017 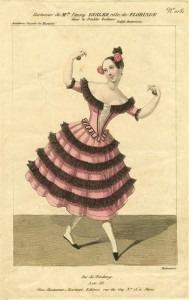 It all started with Hector Berlioz and his Evenings with the Orchestra! A group of bored musicians are stuck in a small town playing overrated operas. With nothing else to do, they tell tales, read stories and exchange gossip about the world of music and musicians. And that’s the idea “Behind the Curtain!” In short, humorous and entertaining tales, we’ll discover the “human side” of famous composers and performers!

She was only seven when she first appeared on the public stage, and by age 17 she was the star of the Neapolitan stage! Her name was Fanny Elssler, and she was well on her way to become the most famous dancer of her age! Elssler had great dramatic talent and her artistic shaping of any ballet character was linked to her mastery of the art of pantomime. Her mime was uncommonly expressive, and a reviewer reported, “With her eyes, gestures and body movements she explains everything as clearly as others do with words.” Appointments in Berlin and Vienna, and guest performances in London and Paris set the stage for a series of rousing triumphs. Audiences around the world, which later included Russia and the United States, went wild when she danced her personal calling card, the “Cachucha.” Her performances of this Spanish dance were filled “with fire and sensual life.” And mind you, her image became exclusively identified with pink satin and black lace! Her dancing style was distinguished by the precision in which she performed small, quick steps, and a critic remarked “Madame Elssler offered a sunny, precise, natural and simply elegant type of dancing: ennobling it, she freed the theater from the former showy jumps.” She undoubtedly was one of the most talented and notable ballerinas of the mid-19th century! Yet, Fanny came from rather humble beginnings. Her father, Johann Florian Elssler was in the services of Nikolaus I, Prince Esterházy. While Nikolaus I paid his salary, his daily work actually consisted of coping out scores for the Kapellmeister at the Esterházy court, Franz Joseph Haydn. Johann Elssler must have been a very busy man! Working that closely with Haydn on a daily basis the two men developed a sort of friendship, and Johann eventually became valet to Haydn. By 1803, Haydn suffered from weakness, dizziness, inability to concentrate and painfully swollen legs. Probably suffering from arteriosclerosis, Haydn was attended throughout by Johann Elssler, who was also present at Haydn’s death.
“La Cachucha”