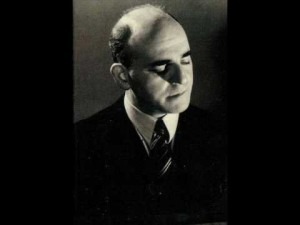 British pianist Solomon Cutner (1902-1988) was known professionally solely by his first name, ‘Solomon.’ He was born in London and his performing abilities were recognized by age 7. He gave his first concerts at age 10 and then, sensibly, retired five years later, only returned to the stage as an adult.

Solomon’s Beethoven performances were legendary, both the sonatas and concertos, and in 1956 he was in the midst of recording the complete cycle of sonatas when he suffered a debilitating stroke, immobilizing his right arm and removing him from the concert stage forever. He died 32 years later at age 85.

Even in playing a work that is so familiar as the Moonlight Sonata, Solomon’s tempos and core stillness enable us to hear the piece in a new way. There’s a poetry in its lyrical presentation along with a not-so-hidden passion in the performance.

Beethoven: Piano Sonata No. 14 in C-Sharp Minor, Op. 27, No. 2, “Moonlight”: I. Adagio sostenuto (Solomon, piano)
When he approaches composers such as Chopin, he brings a modern sensibility to the performance, paired with a needed drama and intensity. His tempo changes bring out the ‘fantasy’ element in Chopin’s Fantasy in F minor in a way that’s rarely heard.

Chopin: Fantasy in F Minor, Op. 49
His performance of Robert Schumann’s Carnaval is authoritative and commanding, and its technical brilliance was probably only matched by Clara Schumann’s own performance. The connection here is that his teacher, Mathilde Verne, had studied with Clara Schumann and so Solomon would have been as close as any performer in the early 20th century to the greatest performer of Schumann’s works.

Schumann: Carnaval, Op. 9, No. 1. Preambule
The 32 years of silence following Solomon’s stroke took a modern master of the piano away from the keyboard too soon. We’re fortunate that he was able to record some 82 works of composers ranging from Bach to Bliss.