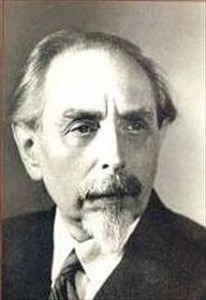 The pianist Samuil Feinberg (1890-1962) was a contemporary of Heinrich Neuhaus and they both taught at the Moscow Conservatory. He’s now largely remembered for being the first pianist to play the complete Well-Tempered Clavier by J.S. Bach in Russia.

In addition to his own compositions for piano, orchestra, voice, and violin (2 sonatas), Feinberg also made piano transcriptions of works by Bach, Tchaikovsky, and others.

In his brilliant transcription of Tchaikovsky’s Pathètique Symphony for piano, Feinberg has captured the complex sound of the orchestration in the piano while also making it a work that sounds as though it were originally written for keyboard.

Tchaikovsky: Symphony No. 6 in B Minor, Op. 74, “Pathetique”: III. Allegro molto vivace (arr. S. Feinberg for piano) (Arcadi Volodos, piano)
When we hear his Bach transcription, however, the utter clarity of Bach’s lines come through, and yet are tinged with more sadness than we usually hear in a regular trio sonata performance.

J.S. Bach: Trio Sonata No. 5 in C Major, BWV 529: II. Largo
In his own performances of Bach, his control of touch and dynamics permits us to hear far more than the usual baroque spinning-wheel effect.

Because of his Jewish religion and the strict controls placed on his movement by the Soviet government, Feinberg couldn’t leave the country after 1930, although he was able to make one trip to Vienna in 1936 and to Brussels in 1938. His artistry was recognized by his country, however, and he was named an Honoured Artist of the Russian Soviet Federative Socialist Republic in1937, was awarded the Stalin Prize in 1946, and received the Order of Lenin, the highest decoration given by the Soviet Union.

Medals aside, we recognize him for bringing Bach into the piano repertoire, for his own playing technique, and his vision for performances.