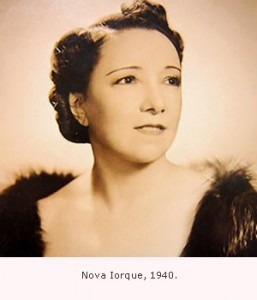 Magda Tagliaferro (1893-1986) was born in Brazil to French parents and learned piano from her father, who had studied at the Paris Conservatoire with Raoul Pugno. With the encouragement of Pablo Casals, Magda also attended the Paris Conservatoire, entering it at age 13. She won the highest examination prize for performance the next year. Her most influential teacher was Alfred Cortot and, in many ways, realized his performance ideas: ‘a perfect union of clarity and tenderness, inner strength and emotion and classical balance in shaping the works being interpreted.’

Director of the Conservatoire at the time was Gabriel Fauré, who took her on tour and also encouraged her to play his music. Her recital tours took her 4 continents, and she was also active in her concerto performances. Casals, continuing their friendship, held joint recitals with her as did Alfred Cortot, Jacques Thibaud, and George Enescu. She taught at the Conservatoir from 1937-1939 and later created her own schools in Paris, Rio de Janeiro, and São Paulo.

Many of her recordings were of South American or Spanish composers and in this recording of the Spanish Dance from de Falla’s La vida breve, we can hear her clarity of performance.

Falla: La vida breve: Danse espagnole No. 1 (version for piano) (Magda Tagliaferro, piano)
Her performance of Villa-Lobos’ Choros No. 5, which is written around a device known as the jeitinho brasileiro (Brazilian knack, or aptitude), involving a rhythmic delay. Here, Villa-Lobos overlays two different rhythmic patterns, moving a triple pattern against a duple pattern. Tagliaferro conveys the complexity as though it was a simplicity.

Villa-Lobos: Choros No. 5, “Alma brasileira” (Magda Tagliaferro, piano)
She played with a beautiful quiet emotion and with a consummate artiststry.