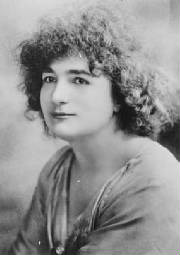 Beethoven specialist Ely Ney (1882-1968) made her name largely in Germany. She began her piano studies with the encouragement of her grandmother, studying first in Cologne and then in Vienna. She had 2 lessons with Theodor Leschetizky and more with Emil von Sauer. After teaching at Cologne Conservatory for 3 years, she began her touring career. Before WWII, she toured internationally, including in the US.

With the rise of National Socialism in Germany and Ney’s involvement in their cultural education camps, Ney’s international career came to an end. Bonn banned her from performing because of her political views, even though she’d been given the Freedom of the City in 1927.

Her lessons with Leschetizky, few as they were, were important in the development of her playing technique because she accepted his teachings on performance where he posited that pianists needed to bring more pressure to their touch in order to achieve a sensuous tone. As can be heard in her performances even from late in her career, she maintained a serenity of performance that is rarely equalled. In a review of one of her early American performances, critic H.E. Krehbiel praised her: “She presses the truism of reposefulness, beautiful symmetry, and varied loveliness of tone upon nearly everything she plays.”

In this 1964 performance of the first two movements of Beethoven’s Moonlight Sonata, every note seems to be perfectly placed and considered. In the fast second movement, her tone remains light and dance-like.

In addition to Beethoven, Ney also had a particular speciality in Brahms, and in this performance of the Brahms Rhapsody, op. 119/4, we can hear the strength in her playing at the opening, matched with her delicacy in the quieter sections.

An incomparable sound, which, matched with unfortunate political beliefs, kept her name out of the limelight for too long.