Alfred Brendel describes Schubert as “a sleepwalker”, yet in his final three sonatas, we see Schubert’s innate sense of musical geometry and his bold treatment of traditional sonata form. These are tightly-organised woks with almost perfectly-balanced structures, perhaps most obviously in the middle sonata of the triptych, the D959 in A. Here, as elsewhere, Schubert uses cyclic devices – motivic, melodic and rhythmic – to create a sense of “belonging” between the movements and as “signposts” throughout the sonata’s narrative. For example, the opening measures of the D959 are reprised at its close, and the first and final movements are almost identical in length. 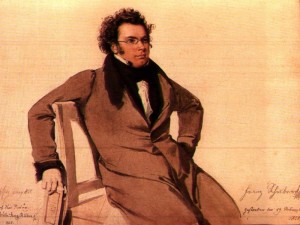 Another unifying factor in these sonatas is Schubert’s use of dramatic rests and fermatas. Silences abound, suspending time and offering pause for reflection, while also clarifying the structural expansiveness of the music. In addition, Schubert’s use of dynamics is often ‘psychological’ rather than purely physical, suggesting an intensity of feeling rather than volume of sound. His generous use of pianissimo in particular creates an ethereality in the music as if hovering between different states.

The C-minor Sonata, D958, is the most Beethovenian in tone and opens with a torrential drive and strength clearly influenced by Beethoven’s 32 Variations in C minor. This gives way to a contrasting, hymn-like second subject, while the development section contains mysterious chromatic passages.

Schubert: Piano Sonata No. 19 in C Minor, D. 958 – II. Adagio
The slow movement is a songful Adagio, reminiscent of the slow movement of Beethoven’s Pathetique Sonata with its peaceful cantabile melody which returns in variation interposed with dramatic sections in contrasting keys. Despite the serene theme, the atmosphere never feels entirely settled and this agitation is carried forward into the Scherzo which opens in C minor. The finale is a frenetic, swirling tarantella with violent dramatic contrasts and the obsessive drive of Erlkonig.
The Sonata in A, D959, is joyous after the darkness of the C minor Sonata, D958, and its themes are nostalgic, spring-like and lilting. In this respect it is related to Beethoven’s ‘Pastoral’ Symphony. The first movement has a dramatic symphonic sweep in its generous breadth, but closes with a softly-spoken coda, bringing a somewhat uncertain end to this long-spun movement. It has the curious effect of setting the scene for the second movement without actually pre-empting it at all.

When it comes, the Andantino seems distant and alien, so utterly different in character from what has gone before. This music is quite unlike anything else Schubert wrote, a “composed hallucination” (Jonathan Biss, pianist), which many people – pianists, scholars, critics, listeners – believe is the clearest indication, in music, of Schubert’s emotional and mental instability, probably due to his advanced syphilis. Whatever the meaning of this movement, its position in the overall structure of the sonata creates a striking contrast between the expansive majesty of the opening movement and the quirky, playful Scherzo which follows it. A lyrical melancholy barcarolle turns, through a series of harsh modulations, into a middle section “storm” of savage, almost hysterical drama before a haunting reprise of the opening melody.

The finale of D959 is also a homage to Beethoven. Modelled on the finale (also a Rondo) of Beethoven’s Piano Sonata op. 31 no.1, in fact the only truly imitative element is Schubert’s reworking of the slow movement theme from his Piano Sonata in A minor, D537, composed more than a decade earlier. The movement has a lilting, good-natured charm reminiscent of his string quartets and quintets, and the dramatic chords at the opening of the sonata are reprised at the very close.

Schubert: Piano Sonata No. 21 in B-Flat Major, D. 960 – I. Molto moderato
Schubert’s final sonata, D960 in B-flat, is scored in the same key as Beethoven’s ‘Archduke’ Trio, and shares its regal expansiveness, felt most strongly in the opening movement whose first subject is one of hymn-like serenity, occasionally disturbed by bass trills. Harmoniously balanced, gently melancholic and imbued with a sense of acceptance, this spacious movement is almost as long as an entire Beethoven piano sonata, and it plots its course like a great river flowing inexorably towards the sea.

In the slow movement, a masterpiece of nostalgic lyricism, Schubert creates a sense of almost complete stasis through a recurring figure in the left hand, and this could be a movement of haunting melancholy were it not for the contrasting middle section in warm A major. The Scherzo sparkles with all the clarity and joy of a mountain stream, its effervescence only briefly interrupted by the minor-key Trio.

The finale has the same structure as the A major sonata, and shares its positive, life-affirming qualities. Far from tragic or valedictory, it closes with a robustly triumphant Presto coda.

Schubert’s final three sonatas take the listener on a rewarding, moving and highly absorbing musical and emotional journey and succeed in expressing, through music, the panorama of the human experience. If ‘Winterreise’ (completed in 1827) is heartbreak, a study in unrelieved sorrow, the final three piano sonatas reveal and revel in all of life – heroism, determination, spirituality, dancing high spirits, humility, intoxicatingly bittersweet, nostalgic, and life-affirming, never unremittingly melancholy nor heavy.