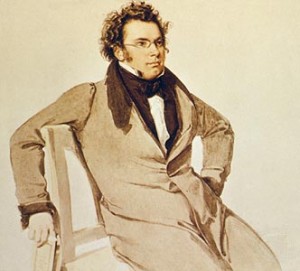 The Sonata in A, D959, is the middle panel of the triptych of Schubert’s final sonatas. Schubert completed his final three piano sonatas in September 1828, just a few months before his death at the age of 31. Schubert numbered the three sonatas sequentially, perhaps envisioning them as a cycle. After his death, Schubert’s brother sold the manuscript to the publisher Diabelli, but the sonatas were not actually published until 1839. They were dedicated to Robert Schumann, a keen advocate of Schubert’s music.

The almost complete survival of the manuscripts of the final three piano sonatas suggests that they were written in two stages: a preliminary sketch, probably made in the Spring of 1828, and a full, final version, most likely notated in September 1828, which contains many remarkable transformations and changes. For example, in the working draft of the Sonata in A, D959, the initial theme is presented in the style of a chorale, without the octave leaps in the bass which give the final version its rhythmic propulsion, and the calm melody of the second subject has far less rhythmic tension and expansiveness. The final version is also notable for its cyclic innovations.

During the 1820s, Schubert had begun to experiment with cyclic devices, whereby motifs or themes established in the opening movement recur elsewhere to create an enhanced sense of “belonging” between the various sections and movements. For example, in the Sonata in A the majestic opening sequence of chords in the first movement re-emerges, reimagined, towards the end of the slow movement, which then forms the melodic outline of the Scherzo and its Trio; the closing bars of the finale refer back to the opening of the first movement; and the arpeggiated ending of the slow movement anticipates the spread chords of the Scherzo. In the Sonata in A, these cyclic motifs are not confined to melodic fragments, however, and Schubert also uses repeating rhythmic fragments to link the sonata’s movements and provide “signposts” throughout the music. These simple cyclic motifs, and an innate sense of musical geometry, allow Schubert to draw the whole sonata together at its conclusion, and represent his boldly experimental approach to traditional sonata form, further reinforced by a dramatic expansiveness (his “heavenly length”), and the daring underlying harmonies which create contrasting and often startling musical colours and mercurial shifts of emotion.

In approaching this sonata, and indeed the others in the triptych, pianists and musicologists have reflected on the notion of Schubert’s “late style” – that is, whether a sense of his own mortality is marked by a change in his compositional style in the works written in the final years of his life. When one considers that Schubert was only 31 when he died, it seems almost inappropriate to assign a “late style” to his work, but it must also be remembered that in early nineteenth century Vienna the average male life expectancy was 36-40 years, and in his short (by today’s standards) life Schubert produced a huge body of work.

The notion of creative lateness is not only related to physical age but also to an attitude of mind. In his book On Late Style (London: Bloomsbury, 2006), Edward Said examines the concept of a distinct artistic/literary “late style” and highlights features such as a certain “insouciance” or self-confidence, which may stem from a sense of completion, serenity, acceptance, or reconciliation. But rather than express an acceptance of his own mortality, Schubert’s last works seem to communicate an “incompleteness”, a sense that he had much more to say, and that he had perhaps reached a moment in his compositional life where he had the freedom to say it without worrying about how it would be received. The overall character and tone of the Sonata in A is warm and good-natured. It feels joyous after the darkness of the C minor sonata which precedes it, and its themes are springlike and lilting. In this respect it is related to Beethoven’s ‘Pastoral’ Symphony. If Winterreise, composed the year before Schubert died, is heartbreak, a study in unrelieved sorrow, this sonata, and other works from the last year of Schubert’s life, reveal, and revel in all of life – intoxicatingly bittersweet, never unremittingly melancholy or heavy, nostalgic, and ultimately life-affirming.

The other very striking aspect of this sonata is the second movement. In all of Schubert’s music this is the movement which provokes the most discussion and theorising amongst pianists, musicologists, critics and audience members, many of whom believe this movement is the clearest indication we have of Schubert’s emotional and mental instability, probably due to his advanced syphilis. For pianist Jonathan Biss it is “a composed hallucination”: it feels like an aberration in the overall scheme of the D959, and is unlike anything else Schubert wrote. “Its modernity is incredible even today” (Andras Schiff). It has a “desolate grace behind which madness lies” (Alfred Brendel), the lyricism of the outer sections providing a dramatic foil to the savage intensity of the middle section, and its position in the overall structure of the sonata creates a remarkable contrast between the majesty and expansiveness of the opening movement, the quirky Scherzo which follows it, and the astonishing warmth of the finale.

How does Schubert create such extreme music? First, the key of the movement is curiously alien from the first movement – and yet it shouldn’t be because it is cast in f-sharp minor, the relative minor of A Major. But the opening movement avoids proper references to this harmony except for a few places towards the end of the exposition and thus the second movement seems very remote indeed.

Secondly, the sense of stasis which Schubert creates in the opening section. The movement begins with a poignant melody full of sighing gestures portrayed by descending seconds over a simple barcarolle-like accompaniment. The almost hypnotic main melody recalls ‘Der Leiermann’ from Winterreise, and Schubert creates an almost static quality in the opening section through restrained melodic repetitions within a narrow register. The entire opening section has a dreamlike fragility and seems suffused with a sense of desolation and loss.

The middle section unfolds like a fantasia, improvisatory in character and growing ever more dramatic with extremely harsh modulations. The music continues to build with increasing savagery via extreme registers and the use of trills to sustain tension, eventually arriving at C-sharp minor and culminating in dramatic fortissimo chords. After this climax, a recitative section follows, repeatedly disrupted by sforzando chords. This leads to a serene phrase, redolent of the G-flat major Impromptu (D899/3), which leads back into the opening melody, now with a more intricate left-hand textures and a haunting triplet figure in the treble. The after-effect of the preceding violence is felt most hauntingly in this closing section. In the final bars, there is a brief shaft of light, of hope, before the music descends into the darkest realms of f-sharp minor.

Despite the playful, bucolic character of the first section of the Scherzo and its chorale-like Trio, and the warmth and nostalgia of the finale, there are hints of the darkness and terror of the second movement: a dramatic fortissimo descending scale in the Scherzo and a reference back to the opening melody of the slow movement; and a turbulent interlude in the Finale, before the rondo theme returns in ethereal F-sharp major. These elements are a reminder of the savagery of the slow movement and they create an extraordinarily heightened sense of drama when the music settles once back into more serene territory.