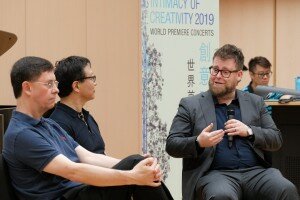 When we last spoke with David Ludwig, he was about to head off for Hong Kong to participate in the 2019 Intimacy of Creativity – The Bright Sheng Partnership: Composers Meet Performers in Hong Kong (IC) festival held by the music department of Hong Kong University of Science and Technology. Now that he’s back, we talked to him about the IC program and his after thoughts.

This was Dr. Ludwig’s first time in Hong Kong, although he’d been to China before. The vibrancy and modernity of the city was, for him, echoed in the vibrancy, excitement, and warmth of the festival. The IC festival matches performers, composers, and audience in the creative process of composition. Through the week preceded the concert, composers and performers workshopped the music. The performers were the members of the Curtis 20/21 Ensemble, which included the Vera Quartet, clarinettist Andrew Moses, and pianist Zitong Wang, as well as additional guest artists Wang Hua on Chinese flute (dizi), Andy Lin on erhu, and pianist Yael Manor. The composers were an international group: Eugene Astapov (Canada), Kai-Young Chan (Hong Kong), Dai Wei (China), Peter Dayton (USA), and Keane Southard (USA). 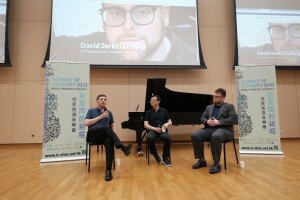 For Dr. Ludwig, this festival was the first time that he’s been in a situation where all aspects of the music being performed was up for questioning and interpreting by all members of a performance: performer, composer, and audience. The experience was revelatory – even for pieces where the composer wasn’t there, such as for the works by Béla Bartók. Every work benefitted from the intense level of inquiry about it. And, to Dr. Ludwig’s surprise, even elements such as form were looked at. It was a revelation for him about the audience, which is mostly viewed as a group to which music is delivered, but which here functioned as the missing part of the creation process.

Bartók: Contrasts (Sz. 111): I. Verbunkos (Recruiting Dance): Moderato, ben ritmato (James Ehnes, violin; Michael Collins, clarinet; Andrew Armstrong, piano)
We spoke about what young composers could take away from the experience, so unlike anything else they’d been exposed to. Dr. Ludwig felt that the festival itself was empowering to young composers – although they might have pre-workshop trepidation about exposing their music and their ideas to an audience, when they were through, they were the stronger for it. The shifting role of the audience, where they move from being part of the collaboration process to sitting in the chairs during the final concert, also had an effect on the composers. The audience, in the end, is the final arbiter – it’s their response that the composer should be looking at most closely. Composers need to develop a line of communication with the audience – they need to build content around a work, be it by pre-concert lectures, extensive programme notes, or just speaking with the audience before or after a performance. Dr. Ludwig thought that much new music is actually LESS challenging than music from a century ago. 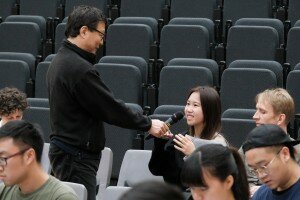 One of the unique parts of an IC concert is that after an evening of cutting edge music, all newly developed, the last work on the program is a work from the past. Although some audience members felt this was unfair – how can a new composer compare with Bartók – Dr. Ludwig thought this was a way of putting all the works in context. Once, the Bartók work was new, too. All music used to be ‘contemporary.’

Sheng: String Quartet No. 4 “Silent Temple”: IV. — (Shanghai Quartet)
Although he walked into the festival not quite knowing what to expect, Dr. Ludwig has come away from IC 2019 seeing that all the excitement, vibrancy and warmth of HK was completely echoed in the festival.