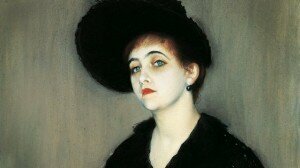 The Scottish operatic soprano Mary Garden, who sung the part of “Mélisande” in the original production of Debussy’s Pelléas et Mélisande in 1902, was to later write about the composer, “I honestly don’t know if Debussy ever loved anybody really. He loved his music – and perhaps himself. I think he was wrapped up in his genius… He was a very, very strange man.” However you look at it, Debussy’s personal life was certainly tumultuous! Awkward adolescent schoolboy fumbling aside, the 18-year old Debussy got his first real lesson in love from Marie-Blanche Vasnier, an amateur soprano married to the Parisian civil servant Henri Vasnier. Debussy was employed as an accompanist for her vocal lessons, and she schooled him in the art of love. Given the substantial difference in age, the 8-year affair also involved a significant maternal element, with Marie-Blanche guiding him in his choice of clothes and instructing him in the ways of the world. Mother figure and lover aside, she also guided him into the world of literature and inspired a substantial number of love songs. Debussy wrote in assorted dedications, “To Madame Vasnier, these melodies, conceived in a way by your memory, can only belong to you, as the author belongs to you.” Or even more telling, “To Madame Vasnier, those songs that have never lived only by her and that will lose their graceful charm if they never pass through your melodious fairy mouth.” 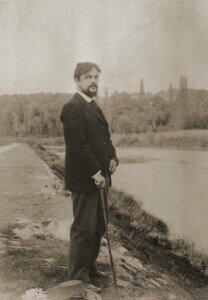 Mr. Vasnier was well aware of Debussy’s presence, and together with Mme von Meck generously supported Debussy for an extended period of time. Finally, in 1884 Debussy achieved temporary financial independence by winning the Prix de Rome. Debussy hated the city of Rome and his fellow students, but above all “I cannot bear to be separated from Mrs. Vasnier,” he wrote to a friend. “I told you that I have become too used to wanting and conceiving only by her…” However, the relationship had simply run its course, and eventually Debussy received a final letter from Marie-Blanche. “The last letter of her that I received, the day before yesterday, hid badly all the trouble that would give me my presence there, telling me that it would be very imprudent to see each other again.” It is not entirely clear whether Debussy tried to revive the relationship upon his return to Paris, but we do know that he ended up in the arms of Gabrielle Dupont, better known as “Gaby.” She was the daughter of a tailor from Lisieux, and “the most remarkable thing about the appearance of this pretty blonde was the strikingly green color of her eyes. She was certainly the least frivolous blonde I ever came across. Her chin was forceful, she was strongly built and looked at you as resolutely as a cat.” Gaby was oozing sensuality and exoticism, and became the muse for some of Debussy’s greatest works. “To Mademoiselle Gabrielle Dupont,” reads the dedication on the first act of his unfinished opera Rodrigue et Chimène. 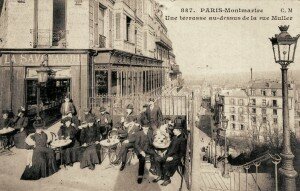 The years of Debussy’s relationship with Gaby were characterized by rather severe financial struggles. While he frequented the literary and artistic cafés of the city—hobnobbing with the bohemian avant-garde—Gaby provided emotional support and took care of the household. They lived in shabby apartments, and Gaby was the sole breadwinner in the family. She apparently worked as a dancer, and tried to look the other way when Claude engaged in one of his numerous indiscretions. Yet, she could not ignore his affair with the singer and pianist Thérèse Roger. Gaby became aware of this relationship by finding a compromising letter. According to Debussy, “Gaby, with her steely eyes, found a letter in my pocket which left no doubt as to the advanced state of a love affair with all the romantic trappings to move the most hardened heart. Whereupon—tears, drama, a real revolver and a report in the Petit Journal.” Indeed, Gaby did point a revolver at herself, but the shot seems to have been aimed to miss. In the meantime, Claude and Thérèse happily performed at a Brussels concert.

Although he was still living with Gaby, he proposed marriage to Thérèse! “I am quite free, my last girlfriend having gone one February morning,” he wrote. The wedding to Thérèse was to take place on 16 April, and the couple was to settle on rue Vaneau. But the aforementioned report in the Petit Journal put an end to Debussy’s shenanigans. Ernest Chausson, who had provided financial support to Debussy, was outraged. It also did not help that Debussy had tried to extract 1,500 francs from him on short notice. Of course, the engagement to Thérèse was broken, and Debussy returned into the arms of Gaby to continue their tumultuous relationship. Eventually, Gaby realized that life with Debussy was not healthy, nor beneficial. She left him for the Compte Victor de Balbiani, while Debussy connected with Gaby’s friend Lilly Texier, a woman he would eventually marry.